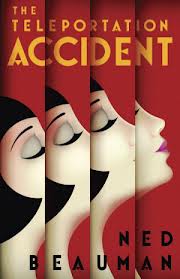 ‘My Ned’s got no nose!’
‘No nose? How does he smell?’
‘Pretty good actually. Not Booker-Prize-winning good, but better than most of the books on this year’s longlist.’


The Teleportation Accident is an inventive, likeable, funny-though-not-side-splitting romp. I apologise for using the word 'romp'; a ghastly piece of vocabulary gristle that, I'll confess, really romps me up the wrong way. But romp is what we have here. We follow the herky-jerkily plotted adventures of a 1930s Berlin theatrical set-designer called Egon Loeser (‘loser’, you see: strum those octave-leaping Beck-ish chords). He is a bit of a wanker, but the male reader warms to him, in part because he has a nicely sardonic perspective on things, but mostly because male readers will identify with his wankerishness.  I've no idea how female readers relate to him, or even if they do.  At any rate, Loeser is erotically obsessed with a pretty, innocent young girl called Adele Hitler (‘no relation’ we’re told, as if it’s funny). Part 1, Berlin 1931, sets the scene: cocaine, booze, shagging, parties. The Berlin described never really comes alive, partly because it reads more like a group of 21st-century youngsters snorting, quaffing, poking and partying. Some historical data is worked in, like hyperinflation (say) although hyperinflation doesn’t seem to impact upon anybody’s good times. There’s quite a good running gag about how ghastly Brecht is.  Meanwhile, Loeser’s life is one melodramatically-overplayed drama of how he can’t get laid, how everybody else is having a better time than him and so on, which has the merit of being true to the way twenty-somethings actually are. Part 2 are we’re still in Berlin, now in 1933, and Loeser’s obsession for Adele has crowded-out everything else. She has by now slept with everybody else in town, but won’t sleep with him. There’s another running gag about how Loeser simply ignores the rise of the Nazis, oblivious to all political developments, even getting inadvertently involved in a book burning, but this didn’t strike me as a very good running gag. In fact these opening scenes, and the third set in Paris 1934, whence Loeser has gone in pursuit of Adele, rather reminded me of Allo Allo. Somewhere at the back of all this is Nabokov's brilliant-brilliant-brilliant 1958 short story 'That In Aleppo Once...', one of the masterpieces of 20th-century prose and work of which Beauman must be aware.  But I'm reluctant to mention it, since there's hardly a novel written since that could do anything but wither in shameful inadequacy when set alongside such writerly perfection. So let's stick with: Allo Allo, with a Teleporter instead of the Madonna with the Big Boobies. Nazis are funny!  Sex is funny!  Comic misunderstanding is funny!

There’s not much by way of any larger plot up to this point.  The titular machine, supposedly invented by a 17th-century Venetian stage designer (its use apparently destroyed the theatre in which its play was being staged) has the flavour of macguffin—I said macguffin, not muffin—and Beauman’s comedy set-pieces are dropped in without particular attention to logic. I’ll give you an example: a farcical inset in part 3 has Loeser and his new friend, American-in-Paris con-man Scramsfield, pretending, in a hotel room, to be doctors, and surgically attaching monkey glands to two wealthy female US tourists. The reasons for this are too complicated to summarise here, and Loeser/Scramsfield use peeled lychees instead of the actual glands. ‘Hilarity’ ensues. The inverted commas around the ‘hilarity’, there, are to suggest that actually I didn’t find it very funny. But my point is this: the scene demands that both men become sexually aroused by the half-anesthetised women, before being interrupted by a lizard, and to that end Beauman just sort-of forgets that he’s already established Scramsfield’s chronic impotence. No matter: it moves along, it’s full of stuff, the pages turn. Then we get to America.

‘My Ned’s got no nose!’
‘No nose? How does he smell?’
‘Very well, thanks to an all-new cybertronic nose developed by the scientists at Cal-Tech.’


Loeser follows Adele to the USA (Part 4, Los Angeles 1935) and gets caught up in the whole German exile/Hollywood scene. There’s a mildly funny episode where Loser attempts to walk the entire length of Sunset Boulevard, believing it to be a street of normal, European proportions (he does not drive, having been traumatised by the death of his parents in a road traffic accident). And this portion of the novel has the novel’s only actually funny character—by ‘actually funny’ I mean ‘properly funny’: an eccentric billionaire businessman who suffers from a mental derangement such that he cannot distinguish representations of things from things themselves: he believes portraits to be real people and so on. Trust me, Beauman does pretty good comic business with this.  Anyway, having set the scene Beauman moves us along to part 5, ‘Los Angeles 1938’. We’re now well over half-way through the novel, and suddenly it's as if, rather belatedly, the author wakes up to the need for a larger plot. In fact the second half of the novel is rather over-supplied with plot, all centring on an attempt to build an actual functioning teleportation machine by a mad boffin at Cal-Tech. Some of Loeser’s pals turn out to be Soviet spies hoping to steal this machine; others have a weather eye to its commercial potential. Adele Hitler has pitched up, improbably, as the mad boffin’s assistant. There’s a 'Loeser still loves Adele' plot; and an ‘H P Lovecraft wrote documentary accounts of the world, not fiction!’ plot, and a serial-killer plot, and glimmers of a Harry Harrison West of Eden plot, and it’s all crammed rather uncomfortably into the book's closing sections. We, the readers, have long since clocked that Loeser/Adele will turn out to be a version of the William Dobbin/Amelia Sedley plotline from Vanity Fair but that doesn’t matter. The American-set scenes are much better than the European-set ones; and the whole novel feels like its finally lifting off the ground. We even reach a moral epiphany, of a slightly limited sort. Do people have responsibilities to their country, home or adopted? ‘Loeser was beginning to think now that a man’s ultimate responsibility was a lot simpler. Don’t be a total prick to the people who try to be nice to you’ [304]. This takes its rhetorical force from being expressed in a novel where a kind of played-for-laughs moral obtuseness is the entire horizon of the characters’ existence, but its still a pretty dilute ethical desideratum. But what can you do? Young people today, and so on. (If I wanted to be more serious I could suggest that Beauman has a real gift for the sardonic without really grokking the nature of novelistic irony; but as it happens I don’t want to be more serious).


That it’s better than most of the novels on this longlist doesn’t mean that it’s a great novel; because this is a weak longlist. I'd say it's a good novel, but not a great novel. It’s fine for a comic fiction to be hit and miss, but it’s important that the hit-rate is a high enough proportion, and that specific moments are punchy enough, to carry the whole. The Teleportation Accident is funny without ever being laugh-aloud funny. It is a novel that can’t make up its mind whether it is doing the one-thing-after-another shtick or the let’s-tie-everything-together-into-a-neat-parcel trick—which is to say, it eventually plumps for the latter (the books ends, like a diet Lord-of-the-Rings-movie, with four endings, and they are marvels of neat final-knot-tyings) but only after some prolonged fictive haverings. It’s too busy, too skimmy, too twitchy. If I say it’s too lightweight I hope you won’t take me the wrong way. Another of the book's running gags is that Loeser is reading the worthily dull modernist masterpiece Berlin Alexanderplatz (small-time singer Justin Biberkopf, fresh from the hairdresser, is drawn into a web of corruption, crime and misery) at the rate of about 10 pages a year; and there is something entirely commendable about the way Beauman refuses to treat the German national tragedy, exile, even the Shoah, with Serious Gravity and Respect. Nonetheless, there is something prone-to-capsizement about this novel’s unique combination of the facetious and the profound. It doesn’t take its unseriousness seriously enough.


Nonetheless, out of the twelve longlisted titles I have to hope this one gets the shortlist nod. Its achievement is tonal as much as anything; but it is a significant achievement for all that. I like very much that Beauman has filled a novel with such unlikeable individuals, and yet made the result so readable -- fiction needs more annoying and unlikeable characters. I like that he has written a book about failure that isn't simply maudlin or faux-tragic.  I like that the novel, though at root an example of not-very-well-realised Historical Fiction, is so interpenetrated with a geek-SF aesthetic as to redeem itself. I read the whole thing quickly, and with pleasure.
Posted by Adam Roberts Project at 00:30

The way you describe it makes it sound a bit like Yellow Blue Tibia. Is it?

I'm going to have to go with 'no'. For one thing, The Teleportation Accident has been longlisted for the Man Booker prize, That was something YBT never managed.

Well, you relieve my mind, as this is one of the two I've got left to go (the other is The Garden of Evening Mists) and I have been getting a little concerned that I have only got two definite and two possible shortlist contenders. I was hoping something good was coming up; sounds like this one might be it.

I agree with what you said essentially, but more so. If that makes sense. I really loved this, and it did make me laugh out loud, on numerous occasions. Perhaps my sense of humour is lacking subtlety but the first half had me laughing out loud pretty regularly. As a female reader, I largely had the same reaction to Egon as you seem to have had. And I loved the very ending. I am working through the longlist so much more slowly (I am impressed at your speed!) but so far this is my favourite.

Sounds as if very similar themes at play here to those in the less rompy 'Solo' by Rana Dasgupta. But the Booker judges have been known to mention the word 'readability' and maybe this swings things in favour of rompiness....