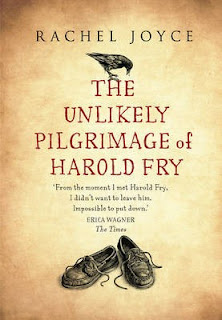 Harold Fry is a timid OAP, hanging on in quiet desperation (is the English way) in an unhappy marriage with Maureen, full of regrets about the emotional froideur he displayed to their only child, clever, angry David—now grown-up and lost to him. One morning at breakfast Harold gets a letter from an old colleague, Queenie: she had worked in accounts at the brewery that also employed Harold, and which had been run by the choleric, violent Mr Napier. In the letter Queenie reveals that she has terminal cancer and is living in a hospice in Berwick-on-Tweed, some 500 miles from Harold’s Devon domicile. He had lost touch with Queenie long before, and although she had never been anything other than a work colleague and friend, he is saddened to hear her news. He writes a reply and steps outside in his loafers to post it. Ah, but when he reaches the post-box he just keeps on going. He decides on the moment's spur to walk all the way to Berwick, believing that this pilgrimage will, somehow, cure Queenie’s cancer.

That’s the novel. Harold perseveres in his crazy quest. He meets various people on the way, and hears their life stories—indeed, Joyce’s England is one in which strangers are unfailingly eager to initiate conversations with a tramp-like elderly man, to open their hearts to him and offer him all manner of assistance, which, I’ll confess, doesn’t sound entirely like the England I inhabit. But perhaps we can just take that as the premise of the novel. The whole thing is certainly engrossing. There’s some light comedy (very light) a little light satire (so light as to be virtually weightless) and a good deal of pathos, some of which is heavily flavoured sentimental. It’s enjoyable stuff. It doesn’t deserve to win the Booker.

That's not to deny that there’s a degree of art to the way Joyce uses this narrative to reveal Harold’s mournful backstory (what happened at the brewery, what became of David), and so flesh out his life and to a lesser extent the lives of those around him. It’s just a little twee. Harold’s walk is a watered-down version of that scene in Tarkovski’s Nostalghia where the character tries to walk the lit flame through that swimming pool—but Harold’s walk lacks the sheer oddity, the leap-of-faith weirdness, of Tarkovski’s character’s. And although mundanity is precisely the theme of The Unlikely Pilgrimage of Harold Fry, something that is one of the novel’s great strengths (I mean: the way Joyce refuses to inhabit the clichés of redeeming eccentricity; the way she steers clear of hugging and learning) it exacts a price in the end from the novel’s larger potential. Soon enough Harold has become a sort of national hero, and acquired a following of fellow-questers. ‘It’s rather English and very endearing’ one of them says, of his decision to walk to Berwick; except that this is also the author commenting, in slightly self-congratulatory mode, on her own conception. And The Unlikely Pilgrimage of Harold Fry is indeed rather English; it’s just that ‘endearing’ isn’t, I think, enough in the end.

The various characters Harold meets are carefully differentiated, and many have interesting lives or perspectives on his adventure. But none of them feel entirely alive; their various circumstances all a tad Radio 4 Afternoon Play-lite. And Harold himself is a problem. He comes across as, well, a simpleton. I wondered for a while if this was because he was autistic, or suffering from Alzheimer’s, but it seems not (his wife Maureen tells her GP that Harold has gone senile, but this is only a ruse on her part to get him sectioned and so returned to her). I fear that Harold is portrayed as simple because Joyce thinks old people are a bit like that: a little slow and obvious and child-like. This, I think, is very wrong; most OAPs are sharper, wickeder, ruder and cannier than many young men and women, having had all the experiences that make young people wicked, rude and canny, but having had many more of them. But this is the world portrayed in this novel. I’m not denying that it is touching, often; and that there are some nuggets of beauty in the progress—from descriptions of the landscape, to little insights into human loneliness and hope. But the metaphorical polystyrene of this novel feels too expanded. It lacks the density it needs properly to create the emotional effect for which it strives. A peripatetic novel emotionally and in terms of focus, as well as in theme.
Posted by Adam Roberts Project at 00:30

It sounds like the plot to David Lynch's The Straight Story. But without the lawn mower.

This is far gooier than the Lynch.

Maybe it needed a lawn mower then.

Also, Werner Herzog did this for realz, for Lotte Eisner. See Of Walking on Ice.

Yes, it certainly had a magical appeal that made you believe it even it might not ever actually happen. So far I haven't found a bad review. Definitely glad I got to this one so soon. Great book!