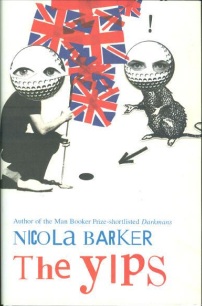 First, a word from our sponsor:


Sprawl is the quality
of the man who cut down his Rolls-Royce
into a farm utility truck, and sprawl
is what the company lacked when it made repeated efforts
to buy the vehicle back and repair its image.

...
Sprawl lengthens the legs; it trains greyhounds on liver and beer.
Sprawl almost never says, Why not?, with palms comically raised
nor can it be dressed for, not even in running shoes worn
with mink and a nose ring. That is Society. That's Style.
Sprawl is more like the thirteenth banana in a dozen
or anyway the fourteenth.

... Sprawl occurs in art. The fifteenth to twenty-first
lines in a sonnet, for example. And in certain paintings.
I have sprawl enough to have forgotten which paintings.
Turner's glorious Burning of the Houses of Parliament
comes to mind, a doubling bannered triumph of sprawl -
except he didn't fire them.

Sprawl gets up the noses of many kinds of people
(every kind that comes in kinds) whose futures don't include it.
Some decry it as criminal presumption, silken-robed Pope Alexander
dividing the new world between Spain and Portugal.
If he smiled in petto afterwards, perhaps the thing did have sprawl.

Sprawl is really classless, though. It is John Christopher Frederick Murray
asleep in his neighbours' best bed in spurs and oilskins,
but not having thrown up:
sprawl is never Calum, who, in the loud hallway of our house
reinvented the Festoon. Rather
it's Beatrice Miles going twelve hundred ditto in a taxi,
No Lewd Advances, no Hitting Animals, no Speeding,
on the proceeds of her two-bob-a-sonnet Shakespeare readings.
An image of my country. And would thatit were more so.

No, sprawl is full gloss murals on a council-house wall.
Sprawl leans on things. It is loose-limbed in its mind.
Reprimanded and dismissed,
it listens with a grin and one boot up on the rail
of possibility. It may have to leave the Earth.

Sprawl is Barker's forte. Sprawl -- I mean in this particular, aesthetically valorised, Les Murray sense -- is what her novels have in spades. Well, I shouldn't over-generalise: she's written nine novels and I've only read two of them, so I'm not really well-informed-enough to say. But I have read the extraordinary Darkmans, shortlisted for the the 2007 Man Booker (and did it really lose to Anne Enright's dreary, downbeat The Gathering? Were the jury high, or something?) And I have, now, read The Yips.

It's the kind of novel designed to resist summary (and, indeed, review). So I won't try to summarise, and I'll only gesture in the general direction of review. It's a pretty complex machine, this book, and if I force it then it's liable to break. Suffice to say (a cliché that always makes me think of the laconic Arthurian knight, Sir Fice de Saï -- though that fact has nothing at all to do with The Yips) the book is about a great gaggle of characters rubbing along in contemporary multi-cultural Britain. At the beginning of the book you may think the central figure will be over-the-hill professional golfer and moderate arsehole Stuart Ransom, with whom we spend quite a long time, in a hotel bar in Luton. But Ransom isn't it; even golf, which I suppose is one of the 'unifying' devices of the novel, isn't it. There's pregnant, forceful, Jamaican Esther, Stuart's manager. There's the barman Gene, a cancer survivor working three jobs; and his wife Shiela, a C-of-E vicar unhappy in her life; and Valentine, an agoraphobic tattooist, and plenty more. Lots happens, but most of the novel is given over to extended dialogue riffs in which characters interact with other characters. This is the make-or-break: if you find her dialogue tedious (and it certainly goes on a bit) then you're liable to bounce-off The Yips. But if you get drawn into these conversational figues then the novel will weave its spell. There's another cliché. Makes me think of Merlin, at the spell-loom.

Now, though I enjoyed this novel a great deal I have to say: it's not a patch on Darkmans. The two novels share a surface similarity: Darkmans is set in and around Ashford rather than The Yips's Luton and is considerably longer (900 pages to The Yips 550), but both titles are sprawl-fests in which myriad characters interact via lots and lots of chatter. Like The Yips, Darkmans says, inter alia: Britain is now a centripetal, multicultural society, characterised by both its jibber and its jabber which, in its mundanity as well as its colour, in its occasional startling insight as well as its ill-disciplined there's-lots-of-time-to-fill chunter, is the aesthetic keynote of 21st-century life. It's like Talk Radio, or podcasts, or Big Brother contestants pouring mostly inane words into the void of their televised confinement, or people down the pub. It takes its force and its point from its open-endedness; a discourse of disclosure rather than enclosure. And like a massive, written-down podcast, The Yips generates its own unique and weirdly modern affect.

That said, Darkmans had something more. In amongst all the surface sprawl was a powerful undercurrent -- history itself. It's possible this only resonated as thuddingly with me as it did because I happen to be English, to have grown up in Kent (a touch further east than Barker's Ashford, but recognisably the same county) and to have been often debilitatingly aware, whilst growing up, of the strange tourbillons The Past sets up in the Present. Darkmans captures that interpenetration of (vertical) long time with the (horizontal) sprawl of modern living exceptionally well. The Yips is also kind-of about history, as it is about many things; but it lacks the particular punchiness that Darkmans managed. The closest this book comes to an organising aesthetic device is golf, which, simply, doesn't work as well. The titular 'Yips' are the nerves that afflict even the best players (or so nervy, boozy Ransom insists) when facing even the simplest of putts. And there is a nerviness here, perhaps, that interferes with the deadpan. It's a good novel. It's not as good as Darkmans. It's not as good as Les Murray either, since his sprawl is held together by (no: is actually a sort of emanation of) God, and Barker is much less interested in that sort of thing). Murray's sprawl is pretty wholeheartedly a thing to celebrate; Barker's sprawl is often bleakly funny, or a bit miserable, or an iteration of ontological pointlessness. But its the authentic sprawl, for all that.
Posted by Adam Roberts Project at 00:30

I'm just about to write and post my review of this one and I completely agree that it's a good novel - I'd go further, I'd say it's better than just good. In the context of this patchy longlist, I think it certainly should make the cut to shortlist. I haven't read Darkmans but if it's better than The Yips, as you say, I need to add it to my TBR pile, because this kind of book works extremely well for me.

As I say in the review, I think one of the reasons Darkmans worked so well for me is that it struck a chord: having grown up in Kent, fascinated (as Barker evidently is) by the interactions of modern and historical England. But I agree: this deserves to make the shortlist.