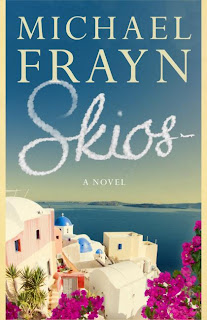 Frayn's farce has a mildly amusing (though not actively funny) set-up: middle-aged, self-satisfied, internationally famous expert on the management of science Dr Norman Gilbert has been invited to give the Fred Toppler Foundation’s annual lecture at their facility on the island of Skios. Gilbert's pomposity is ripe for the puncturing. Also arriving on the island is Oliver Fox, a monstrously selfish (but young-ish and good looking) fellow who likes to seize the moment, is happy to con people, and who is coming to spend a week at a friend's villa with a woman he has picked up in a bar. These two men happen to have very similar-looking luggage. Luggage!  My aching sides.  At the airport Oliver picks Gilbert's bag by mistake; and then when he sees an attractive woman (Nikki Hook, the Foundation's "discreetly tanned, discreetly blonde, discreetly effective" administrator) holding up a sign saying 'Dr Norman Gilbert' he decides, on a whim, to pretend to be Gilbert in the hope of later getting her into bed. Meanwhile Gilbert meets a Greek taxi driver who is there to pick up Fox, Oliver. When he asks Gilbert 'you Fox Oliver?' Gilbert thinks he is talking Greek ('euphoksoliva?') and goes along with him, ending up in the remote villa.

So there you have it: not actively funny, but sometimes mildly amusing.  Gilbert suffers a series of indignities in the villa with the woman who was hoping to spend a week with Oliver, who at first believes him to be a rapist.  Oliver does the Being There thing of uttering banalities that are taken to be profundities by the various eminent guests assembled at the Foundation to hear his lecture.  But about sixty pages in, the farce runs out of steam, and Frayn props and pokes the plot along with increasing contrivance and decreasing charm: characters scurry about, the 'euphoksoliva?' joke is squeezed again for any last dribbles of humour when a Russian lady who speaks almost no English hears Oliver Fox introduce himself and thinks he is saying 'I-like-da fucks'.  The characterisation is thin as an oliver biscuit, and the whole set-up is faux. National stereotypes stray perilously close to outright racist caricature.  Frayn drags his story to the moment Oliver stands up to deliver Gilbert's big lecture; then the novel knight's-moves into a gun-fight/panic/tumbling statues climax that baffled me much more than it amused me, which wouldn't be hard, since it didn't amuse me at all.

How in the name of holy Feydeau did this meagre, forced, unfunny book get onto the Booker longlist?  It does not bode well for the prize this year.  Perhaps a better question is: how did Frayn, who wrote Noises Off, a genuinely great and actually laugh-aloud funny text, sink so low?  There's some jibber and a touch of jabber of pretension (about identity, and social roles, and ... no, that's all I got) that does nothing to leaven the weakness of the gags and the filligree superstructure of story.  Noises Off, when I first saw it, struck me as not only actually hilarious, but in its way as profound.  I think it was the way the actors in the drama struggled to carry on in the face of the increasing absurdity of their situation, despite not only the difficulty of doing so but its pointlessness -- the triviality of the play they're in.  More, I think 'the play' is a metaphorical vehicle with actual purchase for the articulation about truths concerning the world.  But the set-up in Skios feels artificial in a bad way.  The irony is that, where I have never starred in a theatrical farce, I have done the Dr Norman Wilfred thing of being invited to sunny climes to give a guest lecture, of being met at the airport and so on,  I assume Frayn has too, to more prestigious venues and many more times than I.  And whilst many of the details of Skios's account of this world are well-observed the overall effect floats free from actual lived experience.  Weak beer; very weak beer.  If it makes the shortlist I'll roll my eyes. I will.
Posted by Adam Roberts Project at 00:30

Oh dear. I'm strongly reminded of the subplot in The Third Man, where pulp western writer Holly Martins is mistaken for a literary man by a cabal of British expats.

Oh dear. I'm strongly reminded of the subplot in The Third Man, where pulp western writer Holly Martins is mistaken for a literary man by a cabal of British expats.

Oops. So strongly reminded that I somehow posted twice!