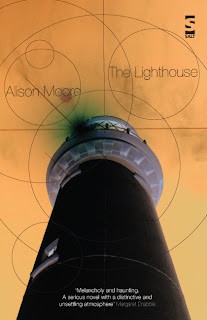 It was with a feeling of, to be honest, relief that I turned from Self’s long, dense, compacted, dyschezic Umbrella to Alison Moore’s precisely written, coolly lucid short novel The Lighthouse.  A glass of cold water, with a slice of lemon in it.  I hope that sense of relief doesn’t translate into overpraise; but I don’t know if it will, for there very evidently is a great deal to praise here. Our Horace-Wimp-y hero Futh is on the ferry from England to the Netherlands, where he has planned a week’s walking holiday to get over his marriage breakdown and general heartbreak (‘his heart feels like the raw meat it is’). Part of the story is him walking, something he proves to be bad at, losing his way, getting corns (‘when he rests he feels his feet throbbing inside his boots’), because he’s altogether a bit of a sad act. Whilst walking he wallows in memories, of his ex-wife, of his abusive father and his mother who left: most of it economically but effectively rendered by Moore. The other part of the story is about sexually wayward, middle-aged Ester, her jealous husband Bernard, and the bed-and-breakfast they run on the Continent, at which Futh stays.

The book’s title perhaps led me to expect an exercise in Woolfiana, but this novel doesn’t have that mouthfeel at all. It’s closer in tone to Süskind’s Perfume, or Perfume reimagined as a sort of mournful contemporary comedy of misunderstanding and dissociation. ‘Mournful comedy’ has an oxymoronic look, I know, but that is what I took away from this.  I can’t discuss the novel’s denouement without spoilers, but it does read like a kind of heartbreaking farce. And (to stay with Perfume for a moment) odours are important to the novel. ‘“I work in the manufacture of synthetic smells,” says Futh' [30]; and the titular lighthouse is actually a perfume bottle, ‘ten centimetres tall … it has a four-sided tower and a lantern room with tiny storm panes and a domed top.’ [37] Cleaning the rooms in her guest house, Ester has no qualms about stealing from her guests, and she takes a liking to Futh’s lighthouse.


The ornate silver case ought to contain a cut-glass vial of a very expensive perfume, but Ester finds that it is empty, the scent missing. [37]

Ah, the symbolism. In fact, the lighthouse originally belonged to Futh’s mum, and Futh broke the glass inside when she left. ‘The scent of it rose from him like a million tiny balloons escaping towards the sky’ [57] Moore says, in an uncharacteristically clumsy sentence.

Uncharacteristic, because it's worth stressing that, sentence by sentence, this novel is very well written indeed. Moore’s touch has the sharp penetration of a hypodermic needle. Here is her brilliant description of what it’s like for Futh as a kid when his Dad hits him:


Before [his mother] left, his father never hit him. Afterwards, when he did, it was without warning, or nothing Futh noticed at the time. It was like when birds flew into windows with a sudden, sickening thud, and then having to look at the bird lying terribly still on the ground outside. [9]

And here we’re inside Ester and Bernard’s unhappy marriage (Ester likes to make her husband jealous; Bernard smells strongly of camphor) as they get into bed together at the end of the day:

Which is very nicely done. I did not find that Futh’s Horace-Wimpishness endeared me to him (maybe it wasn’t supposed to) and sometimes the generally exquisite emotional exactness of tone goes astray—we discover the various reasons why Futh’s mum left his Dad, but I rather came away with the impression that it was largely because Futh’s Dad used to lecture her interminably about lighthouses (aha! significant …).  The phrase ‘in fog the foghorn is used’ is repeated in the book; indeed over-repeated. To speak of the woe that is in marriage, and the woe after it too ... well, this is hardly a new novelistic endeavour.  Overall, though, I suppose the main problem with a novel like this is its slightness. It does read like a (brilliant) short story that has been stretched and elongated with a couple too many flashbacks. But short stories published as novels have done well on the Man Booker before (Amsterdam, Sense of an Ending) and this brief but beautifully written book finds an intriguingly tart new way of telling a story that is, to use the reviewerish cliché, ‘haunting’.
Posted by Adam Roberts Project at 01:20

It is a haunting little book. Chilly, grey, sharp, beautifully written. Granted, it's short - and probably could've been shorter - but I think it's worth the shortlist all the same.