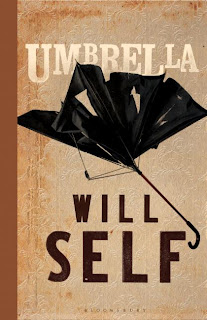 Yes. I know. Hmm. I read it; I sat down in Costa to write up a review, looked through my notes, and ... this is what came out.

If you're looking for more concision, here is what I tweeted after finishing it:

"Finally finished Self’s “Umbrella”: a slow read. My verdict: it’s very brown. Not in a POC sense; in a ‘Windsor Soup/Shit/Mud’ sense."

I rather enjoyed the long version, but it didn't hurt that I was sitting in the bar of the Randolph with nothing to do but watch the World go by, and anticipate the very welcome return, after a long day, of my lovely husband.

That's probably why I couldn't manage anything more than the comment above.

On the subject of umbrellas, I'm something of a connoisseur. On the grounds that I won't leave it anywhere, because it's too expense to replace, I was gifted a gorgeous Italian number in blue and cream silk stripes with a polished bamboo handle. It is glorious.

I couldn't even finish it, to be honest (it was no.8 for me on the list and the only one I've given up on). But I love your review. You have perfectly captured the dense, torpid, incomprehensibility of it.

Thanks, Kathy. She's too modest to mention it, but Kathy's own reading of the longlist can be found here.

Very funny Adam. Will Self may not be a fraud - I dislike his writing so intensely that I can't get through enough of it to form a supportable view on that - but he sounds like a fraud in interviews.
Here's one on NPR that I felt moved to comment on.
http://www.npr.org/2013/01/13/169050378/life-is-difficult-but-rewarding-under-this-umbrella
He says so much about literature that's just immediately, conspicuously wrong to anyone who has, er, ever read any that you wonder if he's actually taking the piss.

Thanks, Mark. Your NPR comment is very much to the point. It's a style (see how long this blogpost got! It happened, as I wrote, quickly and spontaneously) that is, I think, more enjoyable to write than to read.