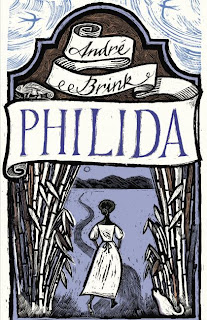 The novel is set in South Africa in the 1820s, and although divided between a number of voices, (most of whom live on a wine-farm in Zandvliet) it’s mostly the story of the title character, Philida, a slave. Here’s one thing: the story is based on historical reality, as a lengthy appendix makes plain. Here’s another: it’s the author’s family history, for the historical Philida was owned by the Brink family, André’s own antecedents. Philida has what (without historical warrant) Brink portrays as a rather tender and loving relationship with Francois, eldest son of her owner's family; it results in four children, not all of whom survive. That's where we start.

Francois’ father, Cornelis, is an old-school bigot and thoroughly unpleasant man.  His attempt to rape Philida in a bamboo field is described at length by Brink (he tries to force the issue by grabbing and threatening to kill Philida’s latest baby; he is thwarted by nothing more than Philida’s strength of will in refusing him—it’s an uplifting scene, but I didn’t believe it for a moment). ‘I don’t take no shit from nobody and even less from a slave,’ says Cornelis during his portion of the narrative. ‘They fornicate and multiply like rats on the farm … in my childhood it was easier. They knew their place.’ [77]. Lest we miss the historical parallels with modern-day old-school bigots who oppose political correctness and pine for an imagined past, Brink slams the point home:


That was before the bloody English came here and thought they could just take over and started making laws … so many working hours per day, so many stripes if they need punishment, a Slave Protector to complain to, I ask you. [77]

And indeed it is to this very same Slave Protector that Philida goes, looking for justice. That's the main action of first portion of the novel.  You see, P.'s lover Frans promised to manumit her in return for the sex she has given him; but he has gone back on the deal. The farm is failing, Frans is set to be married to wealthy white woman called Maria Magdalena Berrangé, and furious old Cornelis wants to sell Philida to a farm up-country. Actually he wants to kill her, but he doesn’t think he will get away with it.

It’s all decently written; often it is vivid, and some of it is moving.  On the downside there’s something modish about the refusal to use quotation marks for dialogue, the use of the present tense and the un-signposted shifts in narrator. Mind you, to balance that (and staying on the downside) there’s something archly old-fashioned and winsome about Brink’s habit—not for the first time in his writing career—of giving his chapters elaborate cod-eighteenth-century titles (‘Chapter XVII: A Very Short Chapter in Which Philida Makes The Commissioner An Offer’ and the like). The novel's first hundred pages are pretty good; then there’s a too-lengthy interlude in which Philida is instructed in the ways of Islam by a character called Labyn (‘Philida grins. Korhaan is a funny name. It’s a bird like a bustard, isn’t it? I suppose it is because you can say it flies its own way, says Labyn. It puts wings in your head’ [187]). Eventually Philida converts:


All I know is I want to be one with the Slamse, that’s where I belong. You Christians treat me like dirt. [231]

Which is all fine and dandy, although it rather soft-peddles the fact that it was the Christians who spent the 19th-century (howsoever belatedly) outlawing slavery, whilst Muslim slave-traders continued happily trading human beings to the end of the century and beyond (here: 'by the 1890s the largest slave population of the world, about 2 million people, was concentrated in the territories of the Sokoto Caliphate ... the Anti-Slavery Society estimated there were 2 million slaves in Ethiopia in the early 1930s out of an estimated population of between 8 and 16 million ... Keltie believes that for every slave the Arabs brought to the coast at least six died on the way or during the slavers' raid'). Still, slavery is a great evil; and we Europeans have more than enough blood on our consciences to be going on with.

Brink takes the bare-bones of Philida’s story and fleshes them out. But he makes his central character into such a beacon of righteousness that historical plausibility begins to bend and shake. I daresay he was only too acutely aware of the dangers of his project—his great-great-howevermany-greats-uncle bodily exploited the historical Philida; now here he is, another wealthy white South African called Brink, now metaphorically exploiting Philida for money and literary prize recognition. I wonder if this is why he repeatedly errs on the side of Philida’s imagined nobility, her dignity, her strength of will. She is, for instance, rather more interested in identity politics and philosophy than was the case, I'd hazard, for most nineteenth-century illiterates. ‘Ouma Nerlla, where am I not?’ she asks at one point. ‘Tell me where those places are so I can go look for myself’ [116]. And the novel ends (it is hardly a spoiler) on an upbeat moment of self-claiming, again modishly lacking the terminal full stop:


The I who was a slave and who now is free, who is a woman and who is everything.
I

One problem, I think, is the Amistad-problem. Spielberg’s film, driven by the exigences of a Hollywood narrative logic, had to move from darkness into the light, and as a result it rather implied that the 1841 Amistad trial marked the effective end of slavery and racism in the US—as if decades of continuing actual slavery, the massive bloodletting of the Civil War and a further century of Jim Crow oppression didn’t still lie ahead. The upbeat trajectory of Philida, including an (I thought) misjudged attempt to wring a bit of sympathy out of old Cornelis, who comes to Philida on his knees: all this is rather contradicted by the century and a half of institutionalised racist oppression that lies between the 1830s and Mandela’s release in the 1990s.

But maybe this isn't fair of me. In fact I think my problem with the novel is more the extent to which it feels derivative. That part of the story where Philida kills her own child to prevent it growing up a slave, for example, is rather crashingly derivative of Morrison’s Beloved, a much, much better novel. (Brink bases it, as Morrison did too, on historical fact of course; but I’m talking in terms of literary pedigree). More to the point, this is a novel that provokes the reader to cry aloud: But Brink himself has done this before! It’s a story about South Africa, about colour, the malignity of racism, apartheid and slavery. It’s a novel in which a white character and a black character connect in complex ways; in which characters trek from the coast inland and vice versa. In other words it’s like pretty much every other Brink novel.

I suppose Brink is most famous for his contemporary-set anti-apartheid novels, books like Rumours of Rain (1979) and the still potent A Dry White Season (1979). But even those kinds of books manifest an interest in longer historical timeframes—1991’s overlong An Act of Terror blends a story about Landman (an Afrikaner South African who becomes involved in an abortive plot to assassinate the SA President) with enough detail of Landman’s ancestors, from their arrival in South Africa in the eighteenth-century to the late 20th-, to make a historical novel in its own right. One of Brink’s earliest English-language novels (I’ll confess I know nothing of the books he wrote in Afrikaans) is the solid, Patrick-White-esque An Instant in the Wind (1976), set in 1749, and concerning a well-bred white woman called Elisabeth Larsson and a black man called Adam Mantoor who are stranded in the wilderness of the SA interior and must trek back to civilisation—the journey enables them to overcome their mutual, if unequal, colour prejudices ; it ends with a shag. The First Life of Adamastor (1993) is much the same story, recast as a kind of rationalised creation myth of the nation. If Philida is parasitic upon Brink’ s own family history, it’s also parasitic upon Brink’s own oeuvre. Characters from Brink’s earlier novels make their appearances here: Cupido Cockroach is one, wandering in from Praying Mantis (2005)—another historical novel based loosely upon actual fact, about a black character’s conversion to religion. There are other characters from another Brink novel, Chain of Voices (1982) also set in the 1820s on a farm in the interior of SA, about the clash between a strong-willed black character and a venal Afrikaans slave-owner. To call Philida Brink-by-numbers would be unfair; but we are entitled to wonder at what point diminishing returns cut in, and the retelling of this docudramatic material might give way to something new.
Posted by Adam Roberts Project at 05:21

I'm not sure what to say about this review, because I actually agree with almost all of what you say (it *is* a derivative book, it *is* Brink mining his own oeuvre, it *does* use Beloved's core device to less successful effect) - but I still found it a more weighty and successful effort overall than you did.

I admit that this is probably shaped by my long-term admiration for Brink's work, so that I found his self-referential habits acceptable and the familiarity of themes a benefit rather than a problem. I would agree that Philida isn't his best book ever, definitely, but I still think it's a damn sight better than many of the other longlist titles.