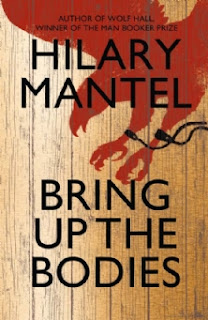 Mantel’s sequel to Wolf Hall is the story of the downfall of skinny Anne Boylen from the point of view of Thomas Cromwell. It has been longlisted for the 2012 Man Booker. It will get shortlisted, and I’m ready to bet you (yes, you sir, and you madam) a fiver it will go on to win. I haven’t read the whole longlist yet, but of the ones I have read it’s far and away the best made [September edit: I have now read them all & cleave to my original view].  Written with completely assured and compelling command of its idiom, it shapes a supple, believable narrative line—cannily pitched under- the statement rather than over-. Much of the book is given over to characters considering what things will happen, fretting over what might happen, planning (or plotting) for things to happen, rather than to the description of things actually happening in the here-and-now, which I liked very much. Not only is it amazingly absorbing, it captures what I take to be an important truth about politics (viz., that politics is much more about counterfactuals, coulds and mights than things actually occurring) rarely put on the page. Even the things that do happen, such as Henry falling from his horse and apparently dying, or Boylen herself getting dead-headed, register in the novel mostly at the level of imagined futures, and the book closes with a novelistic version of that Hollywood end-title that reads 'THE BEGINNING' rather than 'THE END'. Otherwise there’s a quantity of stuff about raising children, which is very finely observed and often wise—that’s one of the resonances of the ‘bringing up’ of the title—and stuff about bodies (to stay with the title) as sexual, and mortal, things. Layered over is a rather slathered-on-with-a-trowel symbolic superstructure all to do with birds: falcons, ravens, swifts, phoenixes. I thought this a touch too obvious, but perhaps it stands out only because the rest of the novel is so subtly handled.

It’s a novel of very many excellencies, and one big flaw. That flaw is Cromwell himself, and that’s awkward, since he's absolutely at the heart of everything. Here’s the problem, I think: Mantel has fallen in love with her subject. He needs to be more Beria, and less Peter Mandelson. More of a brute, the high-rank hired thug of a police state (which is what he was, and more to the point what Mantel’s characters all think he is) and less of an infinitely subtle consciousness parsing memory and human complexity via social wisdom and a rich humanity. I’m prepared to believe that Mantel thinks him the latter, and thinks that his reputation for the former is mostly unjustified; but the novel suffers from his frankly improbable virtue. He menaces us not, and he ought. ‘Faces are not incidental,’ says Lady Rochford at one point. ‘Our sins are written upon them.’ When Cromwell replies ‘Jesus! What have I done?’ it provokes laughter; because Mantel doesn’t really believe that sins are written upon faces.  But we need to believe they might be, if we are properly to enter into a Tudor mindset. Cromwell remembers, as a lad, butting his head against his father’s stomach, trying to hurt him, not realising that the old man was wearing armour upon his torso.


He often thinks about it, that iron belly. And he thinks he had got one, without the inconvenience and weight of metal. ‘Cromwell has plenty of stomach,’ his friends say; his enemies too. They mean he has appetite. Gusto, attack: first thing in the morning or last thing at night, a bloody collop of meat would not disgust him, and if you wake him in the small hours he is hungry then too. [226]

H.M. the writer captures some of the gusto (though not so well as she captures the reflective stillness) of Cromwell; but she captures the bear-like raw bloody collops of meat devouring side not at all. And the book suffers for it.
Posted by Adam Roberts Project at 00:30