Take me to your leader

Where does this phrase originate?  The Oxford Dictionary of Quotations has it under 'catchphrases' and attributes it, vaguely enough, to 'science fiction stories' [6th ed., 2004: 201:28].  Wikipedia is better:


"Take me to your leader" is a cartoon catchphrase, said by extraterrestrial aliens who have just landed on earth in a flying saucer to the first human they happen to meet. It originated in a 1953 cartoon by Alex Graham in The New Yorker magazine. The cartoon depicted two aliens telling a four-legged animal “Kindly take us to your President!” A meta-reference is made in the Douglas Adams novel Life, the Universe and Everything, when Trillian addresses the inhabitants of Krikkit. 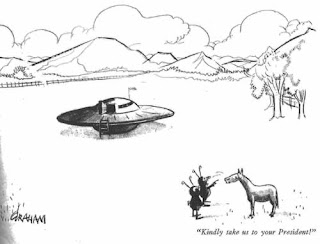 
A Martian with orders to bring back an earthling started on his long journey to this planet. He arrived early, when everyone was still asleep. He walked into a gas station and addressed one of the pumps saying “Take me to your leader”. He repeated his request several times but naturally got no reply. When the Martian returned to his spaceship his boss asked for a report. The frustrated Martian replied: “I asked the creature over and over if he would take me to his leader. But he just stood there silently with his tail in his ear.’

Fat Mattress even wrote a song about the alien and the petrol pump joke. It was called 'Petrol Pump Assistant'. See http://en.wikipedia.org/wiki/Fat_Mattress_(album) Could be one for the SF Encyclopedia?