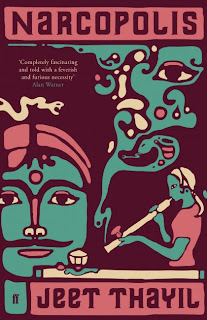 We might want to suggest (and even if you don't want to suggest it, I'm going to) that the big task facing the modern novelist is: how to represent the city. At the beginning of the 20th century fewer than a sixth of the world's population lived in cities; at the beginning of the 21st more than half do -- in the more affluent West, quite a lot more than half.  Cities, as I once wrote in another place, are our new machines for living in.  But how to fix them, in fiction?  Dickens did it by dint of arranging a medium-sized cast of characters, each with a larger-than-themselves representational capacity (standing, as it might be, for 'the aristocracy', 'the homeless street sweepers' and so on) and writing about them with a distinctive, teeming linguistic and observational inventiveness.  The dramatis personae was large enough to suggest populousness, and the style inflected the former with a flavour of teeming, restless, newness and potential.  Fine: but modern cities are much, much larger even than Dickens's London; and I'm not sure I know of many successful attempts to pin them to the board of Fiction.  Or, to be precise: I can think of one, but it's a televisual not a verbal novel: HBO's The Wire. That works, but try to emulate it in words and the cast of characters would surely become unwieldy, the binding would burst the seams trying to hold in the thousands of pages, and the readers would lose their way.

So, onward (excelsior!) through the 2012 Man Booker Longlist, and we come to two novels that set out to  capture at least some essence of urban existence.  Tomorrow (or, like, whenever I get round to it): Sam Thompson's borderline-speculative Communion Town, that adds a carefully-orchestrated formal fractured-ness to the MadeUpPolis template so beloved of the modern Weird.  But today--today is the day for Jeet Thayil's Narcopolis.

The city is Mumbai, Bombay as was, and the time is the late 70s and early 80s.  Thayil's part-dreamily-effective part-infuriating strategy is to parse the urban space via opium.  We start in Rashid's opium house on Shuklaji Street, and in soporific, sometimes poetic, sometimes self-indulgent prose Thayil introduces us to Rashid's regulars, to their mistily rendered intersecting backstories and lives: above all we get to know the Muslim eunuch called Dimple; a sort of intersex character with a (I thought: perhaps over-telegraphed) Waste-Land-Tiresias-esque role in the narrative.  Time moves on, whilst also seeming, in the amber of this book's poetic-prose, to stand still: Hippies come from the West to smoke themselves silly.  Heroin replaces smoky opium as the drug of choice, with a harsh-ening of the general buzz; life in the teeming city becomes more violent.  And time moves back into the past too; as with a vivid recreation of Communist China in the 1940s.  Thayil sets out to reproduce the city partly with the tried-and-tested strategy of introducing a lot of varied characters, each colourful and distinctive, although most down-at-heel, addicted, lassitudinous, beggarly and the like.  But mostly he does it via a sort of impressionism.  It kind of works; the book is an atmospheric Turner-watercolour or Whistler-wash of Mumbai.  It's a place I have never visited, so I'm not really in a position to judge it on grounds of representational precision.  I can judge it as a novel, though. That's my privilege.  Yours too.

OK: in that previous paragraph I talked about characters being trapped in the amber of Thayil's prose.  But that's not right; his prose is not hard, as that implies.  Thayil is a poet (the inside flap, slightly heart-sinkingly, describe him as a performance poet), and more than the episodic plotline and myriad characters, it is through a self-conscious narcotic richness of tone that he sets out to evoke Mumbai.  The whole thing is written in a kind of smoke-of-consciousness style, drifting richly round and round without really going anywhere; sometimes it smells lovely. Sometimes it reeks.  And Thayil's transition to the 'new' India at the novel's end is less to do with plot -- plot in this book is largely superluous, or actively bad, as with a serial-killer sub-narrative that adds almost nothing -- and much more to do with the shift to a semantic field of metal, hardness, sharpness, cocaine and violence.

It's a good novel; better than many on the longlist; but it's a distractingly shapeless, muddled novel as well.  That's not accidental, I'm sure, but saying so doesn't necessarily excuse it.  Bottom line: I'm not sure narcosis is the best way of capturing urban existence.  Consciousness is more than a smoke, after all; even to an addict.  And the problem with drug addiction is that it tends to scuff over, elide or even erase the social roles that define that city living we call 'civilisation'. I'm not moralising when I say so: feel free, so long as you harm no others, to smoke all the dope you like. It's not the morality of drug-taking that's at stake in this novel; it's the aesthetics of it, the effectiveness of it as a metaphor for city life.  This is a novel that says: here's a great world city and it's kind of unstructured, and dreamy, and druggy, and full of lots of different sorts of people, and sometimes these people interact in spaced-out contentment and sometimes in violence.  It's a metaphor-vehicle that only took me so far.  You may find it carries you further: it's certainly a ride worth taking.
Posted by Adam Roberts Project at 05:45

A great novel, I agree; although in essence is says 'a city is lots of individual stories that are linked only through arbitrary physical propinquity' (the people all happen to be on the same tube train). Personally, I'd say there are more organic and more coherent things connecting the people who live in the city than that.