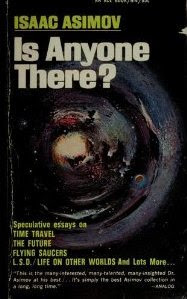 Excellent stuff: all sorts of essays on all sorts of things. There are a few bum notes. A couple of prediction essays get, as Asimov concedes at the beginning of them that they will, lots of things wrong: by 1990 we will all be living in huge underground structures ('people already work in beehives, surrounded at all times by artificial light and conditioned air. They would scarcely know the difference if they were suddenly transported underground', 221) have jetpacks ('small motors mounted on the back will lift a man clear of the ground', 226) and so on. That essay was written in 1965; an earlier piece (1964) looks further ahead, to 'The World's Fair of 2014' which also says that we'll all be living underground and having a whale of a time: 'rides on small roboticized cars which will maneuver in crowds at the two foot level, held up by jets of compressed air, neatly and automatically avoiding each other.' [229]

One odd crotchet: humanoid robots must NOT be built in the shape of women!

Admittedly, the workings inside a robot are comparatively bulky, so the robot must be large. But if it were built in the male form, the necessary size would not be too remarkable. In the female form it becomes ungainly and attracts undesirable attention. Even with the taller-than-usual girl there remains insufficient room for all the necessary internal equipment. [Chapter 35, 'How Not To Build A Robot']

If you say so, Isaac.
Posted by Adam Roberts Project at 03:15