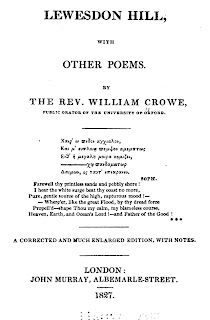 Sure, you may need to click on this to enlarge it in order to read it; but I wonder if that little bit of Sophocles, and more to the point (what I take to be) Crowe's translation of it, didn't directly inform that bit of Arnold's 'Dover Beach' the scholars find so hard to pin down, source-wise. 'Sophocles long ago/Heard it on the Ægæan, and it brought/Into his mind the turbid ebb and flow/Of human misery' Pebbly!

Crowe's Lewesdon Hill is mentioned in passing (and praised) by Coleridge in the Biographia; it was originally published in 1788 but so far as I can see this Sophoclean epigraph only appeared in later, collected editions.
Posted by Adam Roberts Project at 02:17