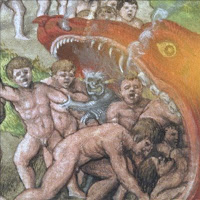 This image (from here), and the many, many others like it from the middle ages, have just provoked a belated relaisation in my brain. I had thought that the reason the medievals were so fascinated by the torture-porn of being eaten by a giant monster was that being eaten by a giant monster would be really painful. But, whilst that's clearly true, I wonder if a more potent aspect to the symbolism is that the medieval chappie liked to identify with predator not prey; that he regarded being eaten, over and above the pain involved, as enormously humiliating ...
Posted by Adam Roberts Project at 13:55

Quite so! Oddly enough, while idly leafing through my dog-eared copy of Geoffrey of Monmouth's History of the Kings of Britain this very morning, I cam across a passage which is proof-positive of your thesis.

The G Man's prose style is usually quite sedate, even narcoleptic, employing a demi-dreary stock vocabulary of actions & tropes but whilst describing the demise of King Morvidus at the hands of an Irish sea-monster in his usual deadpan drone, Geoff lets this slip out of his medieval subconscious:

" … he (Morvidus) went to meet the monster & fought with her single-handed. When he had used all his weapons against her without effect, she rushed at him with her jaws wide open and swallowed him up as though he had been a tiny fish."