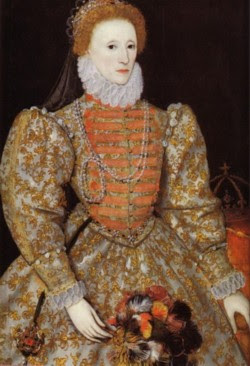 Roy Strong (The Spirit of Britain) on portraits of Elizabeth:

Fear of the wrong use and perception of the visual image dominates the Elizabethan age. The old pre-Reformation idea of images, religious ones, was that they partook of the essence of what they depicted. Any advance in technique which could reinforce that experience was embraced. That was now reversed, indeed it may account for the Elizabethans failing to take cognisance of the optical advances which created the art of the Italian Renaissance ... They certainly knew about these things but, and this is central to the understanding of the Elizabethans, chose not to employ them. Instead the visual arts retreated in favour of presenting a series of signs or symbols through which the viewer was meant to pass to an understanding of the idea behind the work. In this manner the visual arts were verbalised, turned into a form of book, a 'text' which called for reading by the onlooker. There are no better examples of this than the quite extraordinary portraits of the queen herself, which increasingly, as the reign progressed, took on the form of collections of abstract pattern and symbols disposed in an unnaturalistic manner for the viewer to unravel, and by doing so enter into an inner vision of the idea of monarchy. [177]

Hours of fun to be had with the Darnley portrait, there, certainly. I particularly like the detail of the pearls, looped over one breast as if thereby drawing attention the lack over the other breast. Signifying, in other words, that the queen was symbolically an amazon (that she is a-mazos, "without breast"); a figure of mythological strength and martial courage. The multicoloured feathers emerging, it seems, from her vagina is harder to parse; except that it has to do, I suppose, with a sort of fabulous and possibly airborne fertility.
Posted by Adam Roberts Project at 11:05