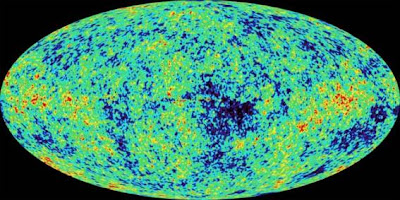 Look into the oval eye. It is everything. Look well enough and you will see: you will start to see, dissolving in paleness against the darker oceanic tints—Africa in the middle: Europe and the arch of Scandinavia above. Asia, heavy on China (because that’s where most of the population is) on the right. Pulled and distorted away to the left, north and South America—this oval is the projection, remember, not the actual shape.

‘You’re not looking for the geographical features of the world,’ I said, ‘but the intensity of population. Soul, if you like. If you prefer that way of describing it. Our world. What is written in letters a million light-years high? What is mapped in the very fabric of the universe itself? We are.’

‘I can sort of see China. But where’s Russia?’

‘That’s Siberia. Hardly anybody lives there.’

He peered again. Magic eye. ‘What about this along the bottom border of the oval? Shouldn’t that be Antarctica?’

‘That’s Australasia, Malaysia. It’s a trick of the projection. Malaysia is one of the most populous portions of the globe.’
Posted by Adam Roberts Project at 02:30