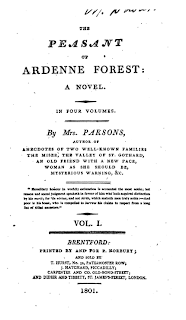 Going off the beaten-track here, no question. For work-related reasons I've been reading a couple of Eliza Parsons' late 18th/early-19th-century Gothic or quasi-Gothic tales. Snap judgment: they're awful, but in quite interesting ways. (I might add: it'll be all Parsons here, for the rest of this week, so if the prospect of that bores you, you may wish to report back later)

Here's one: The Peasant of the Ardenne Forest (1801), available on Googlebooks for free at the other end of that link. Our eponymous hero, Lewis, is a humble Ardennes woodcutter. 'Nature,' we're told,


had been most truly bountiful to him in her gifts which were not simply confined to his person, for she had enriched his mind with a good understanding, a retentive memory, a genius that soared above the humble state of his birth and fortunes,--and with a heart, where honour, integrity, and every social virtue glowed with as much ardour as if he had been born a prince, and inherited nobility of sentiment from a long list of noble ancestors' [1:11]

This little passage is characteristic, embodying both the novel's larger theme (the staggering notion that individual virtue doesn't inevitably coincide with aristocratic lineage) and the novel's flabby, prolix style. The plot certainly takes a long time to unwind: Lewis gives shelter to an elderly man and his beautiful young daughter, Hermine; both of them noble though in distressed circumstances. To be honest, I couldn't work out if 'Hermine' is an actual name, or a Young Visiters-style spelling of 'Hermione'. Reading Parsons generally, I could certainly believe her capable of the latter incompetence.  Anyway, Hermine's father quickly dies of old age (I think), and since she does not disclose her surname, and carries about with her a trunk of papers, there's some mild mystery associated with her.  A local Abbess offers her shelter, although for purely mercenary reasons, believing her to be wealthy.  Indeed much of vol. 1 is given over to not-unrepresentative 'nunneries are full of wickedness' narrative boilerplate typical of English Protestant writers of the nineteenth-century (go browse The Little Professor's blog if you doubt me: this post is a good starting point):


"The Lady Abbess will answer your insolent interrogatories," replied the enraged nun, "and to her you may refer yourself." Then seizing the arm of the trembling, shrinking novice she almost dragged her thro' the cloysters; -- and left Hermine surprised, provoked and excessively grieved. [1:221]

In vol 2 almost nothing happens. Well, Hermine befriends a young English girl called Fidelia, born out of wedlock and abandoned in the nunnery by her father, the well-to-do Mr Douglas; but the father turns up and reclaims her, and then takes on Lewis as a companion for his son Frederic. This youth, however, has 'corrupt principles', the result of 'a dissipated preceptor to whose care he had unfortunately been confided by a weak father' who had encouraged 'the ruin of the youth's morals and health, by a criminal indulgence of his irregularities' [2:136]. In what may be my favourite bit of the whole flabby novel, Fred makes a pass at Hermine, who rebukes him thus: 'with a cool bow she quitted the parlour, and left him to chew the cud of vexation' [2:147]. Ah, the cud of vexation! One of the staple diets of my own adolescent years. One interesting thing: Fidelia's mother, the dissipated Mrs Douglas, has been paralysed down one side as a consequence of indulging what Parsons coyly describes as 'those so-called pleasures'. But she gets better, and this is how:


Thus humbled by disease and neglect her temper grew every day more irritable and capricious ... But very soon after Mr Douglas left England she had been persuaded to try electricity, to which she had constantly objected, and had really found much benefit by it -- returning warmth had reanimated her side, and she could use her hand. [2:187]

The reanimating potential of electricity: interesting stuff in a pre-Frankenstein novel. It's part of contemporary therapuric discourse, of course, rather than SF; but still.

Anyhow, not to beat around the bush: Lewis accompanies young Douglas and another wicked fellow called De Preux to Florence, where his natural peasant vartue is tested by a number of temptations. There's a great deal of narratorial moralising  -- 'how vitiated, depraved, and contemptible is the mind of man when once he gives himself up to dissipation, and becomes the slave of a vicious woman!' [2:264] and the like. By now we've reached vol 3, and still almost nothing is happening.  Lewis sees through the evil De Preux, who stabs him with a stiletto, though not fatally. Young Douglas falls ill, and is redeemed from his evil ways.  Lewis meets Hermine's aunt, Lady Somerset, and learns her back story. There's some patriotic reinforcement of the natural superiority of the English ("Brave, sincere, liberal and munificent!" "Such I believe is their reputation in most countries, and I would have respect and esteem for the British character be impressed upon your mind." 3:151), and Parsons iterates and reiterates at tedious length her main point, viz. the innate virtue of Lewis: '"I am really astonished," said her Ladyship, "at the manners and understanding of that young man. -- Nature has done more for him than high birth and a finished education with many of our modern young men of fashion."' [3:188] The scene shifts to London. The beautiful but wicked Countess Eleanora kidnaps Lewis with a view to depraving him, but he resists her blandishments -- somewhat after the manner of Joseph Andrews, though without Fielding's humour or irony or, you know, ability actually to write:


Mean time the ci-devant Countess whose passions, naturally violent, had risen almost to the degree of frenzy, who, for the first time in her life, had conceived a most fervent attachment for Lewis and had flattered herself that the seducing charms of her person, the fortune she possessed and the blanishments of love, would, altogether, allure the affections and gratify the vanity of a low born, obscure young man, [was] maddened by her disappointment. [4:24]

When reading passages like this I like to imagine that Lewis looks exactly like Lewis from the Inspector Morse TV series. But, really, Vols 3 and 4 drag dreadfully. Then there's a flurry of action a little before the end: Eleanora tries to shoot Hermine, assuming (erroneously) her to be a rival  for Lewis's affections ('"Seize her!--seize her this moment!" cried Lord Somerset ... Fidelia shrieked and fainted. "No, no," said Lewis, in an agony. "O! for Heaven's sake keep behind me -- let me receive the ball!" [4:257]). Eleanora is disarmed, and various characters preach at her for many pages ('shameless woman, a disgrace to your sex, I wave all delicacy with such a wretch!'). Eleanora stabs herself in the chest, receives medical treatment, has fits, and after 60 pages of padding it out, dies. Finally Lewis marries Fidelia -- a middle-class female being more appropriate bridal material for him than the upper class Hermine I suppose, despite his passion for her, and despite Parsons' inerminable stress upon his actual virtues.  But Hermine buys him an estate, and effectively raises him in rank. So that's alright then.

I called this novel bad but interesting. In what does the interest, then, lie? Not in the overheated, poorly managed frantic intriguing love-storying, silver-forkish travel narrative, or the occasional flurries of what Parsons fondly imagines are 'excting action.'  Rather it is the way Parsons sets herself an explicit moral about class and then cannot live up to it.

The novel opens with ‘a very tempestuous day, followed by a violent story, for several hours during the night’. Lewis reports that ‘“The Abbey and Convent,” said he, “ingulphed as they are in the bosom of a thick wood, have little to fear from the violence of the tempest ... But I fear the remaining part of the old Castle is entirely demolished; its battlements are doubtless thrown down’ [1:4]. This suggests the novel will establish vaguely liberal post-French Revolution bona fides; religion will survive ‘the storm’, but the castle will not—the old oppressions of class will be swept away, but the Rousseauian nobility of the common man (in this French forest) will stem the destructive potential of terror. So Lewis goes to see what has happened to the Castle—and the storm has left it untouched (‘great was his surprise when he beheld at a distance the turrets of the castle peeping over the trees’, 1:5). This odd little narrative cul-de-sac is actually symbolic of the novel’s larger ideological knot: for this is a text that asserts, repeatedly and tediously, that the humble Ardennes peasant Lewis has the honourable nature of a prince; but nevertheless it cannot let go of the idea that honour is actually a function of nobility and breeding. Lewis’s homely virtue is talismanic as he travels around Europe, but almost all the other characters are noble. Aristocratic vice is largely a matter of sexual delinquency, the larger system is fine as it is, and Lewis’s is rewarded after the manner of a lower-rent Richardsonian Pamela by being elevated by marriage and an aristocratic gift of land, to the respectable classes. To say that the book lacks the courage of its convictions would be to suggest that it has convictions.  The truth is that Parson’s one idea—a member of the proletariat may be virtuous—is swamped by the larger infatuation with the structures of money, status and class. In this respect it seems to me superbly revealing of a specifically British, or perhaps English, response to the French Revolution—less politically reaction than Burke and his tribe, but very far from being able to sympathise with the levelling principles behind the undertaking.