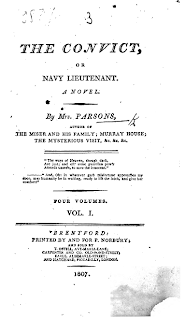 Edward Copeland's Women Writing about Money: Women's Fiction in England, 1790-1820 (Cambridge University Press, 2004) notes how Eliza Parsons’ husband’s financial collapse forced her onto a punishing literary treadmill. To quote Parsons herself: ‘I was compelled by dire necessity to become an Author, and in the course of 12 years have written 65 vols of Novels under every disadvantage of Sickness, Indigence, never ceasing Anxiety, and as many repeated misfortunes as human sufferance could well support’ [in Copeland, 43]. Even if we assume, as perhaps we may, that ’65 vols’ means, strictly, volumes (most of Parson’s output consisted of 4-vol novels; she also produced 5- and 6-vol translations and other things) that’s a pretty steep workrate. She was so prolific, indeed, that even experts don’t really know how much she published.  Here’s Copeland again:


In spite of Parsons pious insistence in her last novel, Murray House (1804) that Anna Sydney, the heroine, must, as the whole duty of woman, obey the demands of her feckless father and her philandering husband, she draws a devastating picture of a male-controlled economy. [46]

Henry Thompson, a curate’s son, is a navy lieutenant on the HMS Vengeance. He takes pity on an orphan girl, but his duties at sea mean he can't care for her directly, so he pays some friends, Mr and Mrs Barton, to look after her. Barton loves the child, but comes to hate his wife (‘her cruelty to little Fanny was beyond endurance; it so indisputably proved the baseness of her soul, that no consideration on earth could induce him to remain domesticated with a woman so devoid of feeling and humanity’ 1:124). So Barton separates from his spouse, obtaining a warrant as first mate to a ship’s surgeon and making alternate arrangements for the girl. We discover the orphan’s girl’s mother was a convicted criminal, whose written testimony Thompson reads (‘Oh!’ it says ‘that this horrid tale may impress an awful lesson on the minds of the young and inexperienced female!’ 1:141). Seduced and abandoned by the Right Honourable Lord C—, she was driven to attempted murder.

Fanny, the orphan girl, goes to stay with Mrs. Fitzwilliam and her posh relatives who live at a house called Malvern Abbey. This is the point during my reading where I started to think: ‘hmm, this has a certain Mansfield Park-ishness about it'—(or I suppose it would be more accurate to say that, Mansfield Park (1814) has a certain The Convict-ishness about it, Parsons' being the prior text): the stately home; the virtuous, diffident young girl called Fanny surrounded by various well-bred people who treat her indifferently; the West Indian connection (for Thompson and Barton are both posted to the Windies). The 'naval officers' angle perhaps recalls Persuasion (1817), too; and there are occasional moments of Sense-and-Sensibilityness too: as when Mrs Fitzgerald dies, leaving a will: ‘All my landed estates, independent of Malvern Abbey which was settled on his father and his heirs, with ten thousand pounds from my landed property, to be my nephew Meredith’s … Ten thousand pounds to each of my two nieces, daughters of my sister Bruce, now resident with me. … To Fanny Thompson, whom I have taken under my protection, I give forty-five pounds a year, for clothes and education, for seven years from the date of this my intended will. At the expiration of the said seven years, the further sum of three hundred pounds to place her in some line that may enable her to procure her own subsistence.’ [3:25-6] Fanny’s legacy is small enough, but still provokes envy:


The young ladies, who were present at the reading, were at first much elated by their legacy of ten thousand pounds. But when a little cooled, and they reflected on the great property, thrown into the hands of their cousin, with the bequests to poor Fanny, envy and rancor took possession of their bosoms; … So blind is envy to its true interest. [3:23]

So Fanny ends up with nothing. All this lacks Austen’s expert ironic touch, of course; but its outlines are familiar: ‘The poor girl often felt the consequences of her apparent degradation from others, by the haughty impertinence of some ill-bred and bad tempered misses, whose chief merit lay in their high birth, or their riches; and who, while they affected the utmost contempt for the poor orphan Fanny, were not a little mortified in seeing themselves excelled by her in many points’ [3:117].

Meanwhile Lieutenant Thompson is unjustly dismissed from the Vengeance, and becomes Captain of the Britannia, ‘a country ship’ (that is to say, a ship that trades with the ports of the East) owned by a certain Mr Selwyn. Unfortunately the Britannia is ‘wrecked on the Malabar coast’, such that ‘it was feared Captain Thompson and his people all perished, or had been carried off prisoners by the native Indians’ [3:81]. Selwyn adopts Fanny, who is moved to another country house called Ringwood Park, to live with the kindly Mrs. Wharton (‘there was a very good library in the house, and there Fanny passed most of the hours’ 3:134) and afterwards becomes the companion of Lady Overton in London. This latter ‘had been initiated into the vortex of fashion by a set of despicable interested beings, who sought their own gratification by her destruction. Her fortune was the lure to the unprincipled and avaricious, her beauty the meteor which attracted the eyes and hearts of the gallant, gay Lotahrios of that age ‘[4:62].  Overton is married, but ‘her husband’s unhappy debility of body and intellect left her sole mistress of her own actions’—a situation which Parsons straightforwardly deplores. Anyway, living with Overton, Fanny comes into contact with a fast set of London aristos.  The wicked Lord Presville attempts to seduce her (‘you must, you shall be mine!’ 4:147) and is unimpressed by her virtuous rejection: ‘ridiculous! You have already seen enough of the world to know that virtue, as you call it, claims but very little pre-eminence in the fashionable circles’ [4:149]. But just as she is about to be raped, Fanny is rescued by a mysterious stranger who knocks the lord down with his walking stick. This turns out to be Thompson himself, not dead in India after all—‘yes reader,’ says Parsons, with studied vagueness, ‘it was the identical Lieutenant Thompson…—Thompson, who after four years residence among the Indians had wonderfully effected his escape’ [4:171]. Yes, yes! That part of the story doesn't sound in the least bit interesting! You're quite right, Eliza, to hurry past it, in order to concentrate on your interminable London polite-society stuff.

Anyway, Fanny befriends a family called Lascelles, and their son William falls in love with her. Then, after various longeurs, the novel suddenly jerks to life for a stompingly melodramatic ending.  Fanny’s mother, it transpires, is not dead; and Fanny is reunited with her (a mysterious invalid called Ellen Lumley, preserved from the hangman's noose by an unlikely last-minute royal pardon.). She also learns that her would-be rapist Lord Preswick is her father ... ‘our readers are now informed that Lord Presville was the infamous, unprincipled man who, under the fictitious initials of Lord C— and Lord M— in the Convict’s narrative, seduced, deceived and abandoned that unhappy young woman’ [4:251]. When all this comes out, Presville has an unlikely change of heart and (very belatedly) proposes marriage to Ellen. But she rebukes him, and later dies ‘serene to the last moment’ [4:330] Fanny marries William Lascelles, and the various, numerous other characters are shuffled off with indecent haste (‘of the other characters introduced into this work,’ Parsons says, ‘we have but little to say', 4:340). The book concludes on a clanging note of moralizing: ‘the errors and wrongs of Ellen exemplify how wide spreading is vice, how dreadful its progress, and how awful in its termination! [4:350]. So that’s us told.

The Austen flavour is most evident in vol. 3, it must be said; and overall there’s little actual merit in the novel. Despite the nautical theme, Parsons is wholly uninterested in actual scenes at sea. There are a few less-than-convincing bits of naval slang right at the beginning (‘dash my buttons!’, 1:3 ‘Avast take care how you steer!’1: 35; ‘Young woman, you are upon a slippery fore-castle!’ 1:37), but the book swiftly becomes bored with all that and throws it over. Almost all the action has to do with the conversations, courtship and intrigue of polite society. But Parsons’ melodramatic instincts keep intruding, and dragging the novel down into absurdity. Still, it is at least possible that Austen read this novel, and that bits and pieces of it fed into her own imaginative creative life. Which seems to me a mildly interesting thing.

(PS: What does Parsons’ Fanny look like? ‘She was a clear brunette, an animated complexion, expressive dark grey eyes with long dark eye-lashes; an oval face, good teeth and fine hair … her nose might, by some, be thought rather too large, and her mouth not exactly a model of perfection, therefore, though every one who saw her, would pronounce her a very pretty genteel girl, she was not a beauty;—she was attractive, but not dazzling. [3:152] We might compare Austen’s Fanny: ‘she was small of her age, with no glow of complexion, nor any other striking beauty; exceedingly timid and shy, and shrinking from notice; but her air, though awkward, was not vulgar, her voice was sweet, and when she spoke her countenance was pretty’). Moral? Broadly sentimental: viz ‘misfortunes humanize the mind, and teach us to feel for others’ [3:264])
Posted by Adam Roberts Project at 00:30

I'm excited to hear of this author, and am determined to find some of her works to read-- thank you, much, for bringing her to my attention.

I think I've probably come to her through the most unusual means; my granddaughter is apparently, unbeknownst to us - since we'd never heard of her - her namesake, and it was just in googling her name, merely to find it in print in a printable font, that we learned of her, so now just trying to find out more - finding this quite intriguing