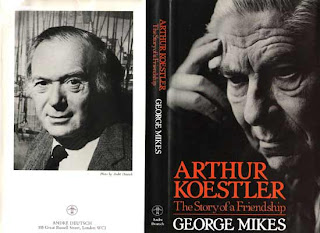 'Controversial' is a bit of a weasel word, isn't it? Wikipedia has a section in its Koestler entry entitled 'Controversial personal life':


Koestler's relations with women have been a source of controversy. In 1998, a biography of Koestler by David Cesarani alleged that Koestler had been a serial rapist and that the British writer Jill Craigie had been one of his victims in 1951. Craigie confirmed the allegations

Ugh. Wikipedia also informs us that these 'controversial' claims have been contested. OK. I picked up a charity-shop copy of the George Mikes title, above, which has a whole chapter on Koestler's relationship with women. He's upfront that Koestler had sex with a great many women (despite being in other relationships); that he pursued women, sometimes aggressively. 'There is,' Mikes breezily informs us, 'a world of difference between the Continental and the English approach to women.' For instance?


In Hungary we would never describe a man as a "womaniser". We do not even have a proper synonym for the word. If we had, it would not have a pejorative meaning. In Hungary, and everywhere in Central Europe, you would say that "he is quite a Don Juan" or would declare admiringly, perhaps enviously, that he has great success with women. In Central Europe, every woman was regarded as fair prey. She could always say "no" and -- after several renewed attempts to persuade her to change her mind -- her no would be taken for an answer, even if grudgingly. But not even to try? This was a ridiculous notion, implying shyness and timidity, quite unbecoming in a real male, and probably offensive to any pretty lady. [27

And there you have it. Any man unprepared to engage in sexual harrassment, up to and including rape, is timid and unmanly. Why, not to sexually harrass a woman is actually offensive to women! The logic is impeccable.

Mikes goes on: 'the British do not chase women' and then offers two possible explanations as to why. The first is 'perhaps they have no choice; perhaps their women say yes in a matter-of-fact and unromantic way.' As if! The second possible explanation, though, is more interesting: 'perhaps a growing number of men are chasing other men.' And with that, m'lud, the defence rests.
Posted by Adam Roberts Project at 00:03