Isn't that a splendid title for a blogpost?

The kernel of an essay on Gosse's Father and Son occurs to me, which would take the following passage from Jameson's Valences of the Dialectic as a theoretical jumping-off point:

The dialectic [in Marx's Eighteenth Brumaire] is a constant reversal of older stereotypes of causality, of historical and narrative efficacy and efficiency ... But here we now draw closer to an understanding of the dialectic as a set of operations, in situation, rather than as some static "view" or even "philosophy"--in this case of history itself. ... now at a certain point along the way, it seems to me that such dialectical narratives froze over and became codified; so that new narratives procedures had to be invented to undermine them in their turn. The two I would above all wish to single out for twentieth-century historiography are Freud's Nachträglichkeit, his so-called retroactive effect, whereby the arrival of puberty, for example, triggers events thathave in some sense already happened at the age of three, but in another sense have not yet happened at all; and alongside that, Derrida's notion of supplementarity, in which, following Jakobson's notion of the synchronic, a new moment in the system comes complete with its own brand-new past and (as in Husserl) reorders our perception around itself as a center (the permanence is then projected back endlessly into time). I believe that both these historiographic forms have occasionally been understood as critiques of the dialectic, and I understand why; but I hope it will also be clear why I now perversely consider both as contributions to a dialectical rewriting of history rather than some newfangled post-dialectical inventions. [287-88]

Father and Son might not appear, at first glance, terribly dialectical: recall how it opens:

This book is the record of a struggle between two temperaments, two consciences and almost two epochs. It ended, as was inevitable, in disruption. Of the two human beings here described, one was born to fly backward, the other could not help being carried forward. There came a time when neither spoke the same language as the other, or encompassed the same hopes, or was fortified by the same desires. But, at least, it is some consolation to the survivor, that neither, to the very last hour, ceased to respect the other, or to regard him with a sad indulgence.

But what interests me particularly about the memoir is the centrality of its account of Gosse père's attempts to synthesise religious and scientific truth. This from the fifth chapter:

So, through my Father's brain, in that year of scientific crisis, 1857, there rushed two kinds of thought, each absorbing, each convincing, yet totally irreconcilable. There is a peculiar agony in the paradox that truth has two forms, each of them indisputable, yet each antagonistic to the other. It was this discovery, that there were two theories of physical life, each of which was true, but the truth of each incompatible with the truth of the other, which shook the spirit of my Father with perturbation... This was the great moment in the history of thought when the theory of the mutability of species was preparing to throw a flood of light upon all departments of human speculation and action ... In the year before, in 1856, Darwin, under pressure from Lyell, had begun that modest statement of the new revelation, that 'abstract of an essay', which developed so mightily into 'The Origin of Species'.

Gosse sr's intervention into this debate was the Omphalos, a really most extraordinary book. 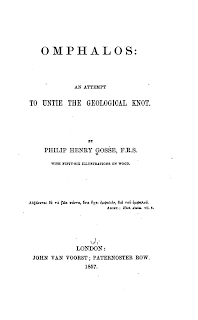 Gosse's 'solution' is that the world is both c.6000 years old (as it says in the Bible) and millions of years old (as the fossil record implies); that God created the world in exactly the way described in Genesis, but that he created it already old. The geological and fossil evidence is there because that's what you'd expect to find in a really old world, which is just what God wants, even though the world is actually relatively young. This, I think, is a neat thesis (and unfalsifiable, to boot). But Victorian society rejected it:

Never was a book cast upon the waters with greater anticipations of success than was this curious, this obstinate, this fanatical volume. My Father lived in a fever of suspense, waiting for the tremendous issue. This 'Omphalos' of his, he thought, was to bring all the turmoil of scientific speculation to a close, fling geology into the arms of Scripture, and make the lion eat grass with the lamb .... But, alas! atheists and Christians alike looked at it, and laughed, and threw it away. In the course of that dismal winter, as the post began to bring in private letters, few and chilly, and public reviews, many and scornful, my Father looked in vain for the approval of the churches, and in vain for the acquiescence of the scientific societies, and in vain for the gratitude of those 'thousands of thinking persons', which he had rashly assured himself of receiving. As his reconciliation of Scripture statements and geological deductions was welcomed nowhere, as Darwin continued silent, and the youthful Huxley was scornful, and even Charles Kingsley, from whom my Father had expected the most instant appreciation, wrote that he could not 'give up the painful and slow conclusion of five and twenty years' study of geology, and believe that God has written on the rocks one enormous and superfluous lie',—as all this happened or failed to happen, a gloom, cold and dismal, descended upon our morning teacups.

This is a shame, I think; because Gosse sr's theory is precisely a Nachträglichkeit-isation of our understanding of the world. Martin Gardner:

This is not as ridiculous as it way seem at first. Consider, for example, the difficulty which faces any believer in a six-day creation. Although it is possible to imagine Adam without a navel, it is difficult to imagine him without bones, hair, teeth, and fingernails.  Yet all these features bear in them the evidence of past accretions of growth. In fact there is not an organ or tissue of the body which does not presuppose a previous growth history.... The same is true of every plant and animal.  As Gosse points out, the tusks of an elephant exhibit past stages, the nautilus keeps adding chambers to its shell, the turtle adds laminae to its plates.... In short — if God created the earth as described in the Bible, he must have created a 'going concern.' (Martin Gardner 1957: 126)

And here are Gosse sr's own words:

Phase II (in which Doris gets her oats) will follow, in which this circularity, this Freudo-Derridean calcification of the dialectic, is read back into Edmund Gosse's own account of origins, creation, circles and retrospectivity. But that's for another day.
Posted by Adam Roberts Project at 00:47