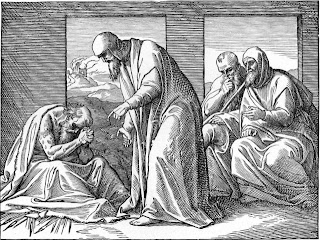 I found an old 1906 edition of this Biblical or Torahic book (edited by S R Driver 'Regius Professor of Hebrew and Canon of Christ Church, Oxford'), bought it for £3 and read it straight through. An interesting experience. Driver says this in his introduction: 'the main aim of the Book is a negative one, to controvert the dominant theory that all suffering proceeds from sin.'


The doctrine that righteousness brings prosperity, while wickedness results in misfortune, is often taught in the Old Testament ... the doctrine was deeply impressed on the ancient Hebrew mind; and all exceptions were a source of great perplexity to it. [viii]

So Job sets out to argue that 'God's retributive justice is not the only principle by which men are governed'.


Positively the book teaches -- 1. that sufferings may befall the righteous, not as a chastisement for their sins, but as a trial of their righteousness, and a test of its sincerity ... 2. The book teaches the danger of conceiving too narrowly of God and His providence. 3. Inasmuch as Job, in spite of his combined physical and mental suffering, does not succumb to temptation, it teaches, in opposition to the insinuation of Satan, that man can love God for His own sake. [ix]

This last one interests me; because I very much didn't get the sense of it, reading the book straight through. Job is doing well in life until disaster strikes with appalling suddenness and (apparent) arbitrariness. He is helpless to prevent the loss of everything. Suffering, in other words, overmasters him; it is presented precisely as a force (almost as Simon Weil's capitalised 'Force') that is always, necessarily, stronger than we. Another way of putting this would be to say that had Job's sheep died of murrain and his servants run away we might mistake the point of the book as being something along the lines of 'Job should have kept better care of his livestock, and maintained better discipline amongst his servants'. But 'the fire of God is fallen from heaven, and hath burned up the sheep, and the servants, and consumed them' leaves us in no doubt. Job is interested in the way sufferings overmaster us, and more specifically interested in how we react to such suffering. But the structure of the whole, from Job's first sufferings (the loss of his 'property' [which I put in inverted commas because his property is taken as including his children and servants]), his second sufferings (his 'boils' -- though according to Driver the Hebrew is better translated, strikingly, as 'elephantiasis'), his despair, his comforters, and the cycle of hearts'-crying and recrimination -- that structure is abruptly interrupted by the appearance of God's own voice at chapter 38:


Then the LORD answered Job out of the whirlwind, and said, Who is this that darkeneth counsel by words without knowledge? ... Where wast thou when I laid the foundations of the earth? declare, if thou hast understanding. Who hath laid the measures thereof, if thou knowest? or who hath stretched the line upon it? Whereupon are the foundations thereof fastened? or who laid the corner stone thereof; when the morning stars sang together, and all the sons of God shouted for joy?

Job's wife says to him: 'Dost thou still retain thine integrity? curse God, and die.' I take the implication here to be, in effect, zero sum: at such times either one can retain one's human integrity and curse God; or one can continue to praise God, provided you sacrifice your integrity. Something like this seems part of the point of the conclusion of the book (Job's last words are the self-abnegating 'Wherefore I abhor myself, and repent in dust and ashes'). After this Job is rewarded: he has learnt his lesson, which is precisely to abandon his integrity.

A couple of other things intrigued me about the book. One is the skin trope. I already knew, of course, Satan's striking expression: 'and Satan answered the LORD, and said, Skin for skin, yea, all that a man hath will he give for his life' [2:4], something Driver glosses in a curiously deadening manner ... 'the meaning apparently is: a man will sacrifice one part of his body to save another, an arm, for instance, to save his head, and he will similarly give all thathe has to save his life', [4].  Norman C. Habel's commentary is a little better, but only by acknowledging the oddness of the phrase: 'Satan's cryptic expression "skin for skin" is probably an ancient folk saying with innuendoes now lost to us [Book of Job: a Commentary (Westminster John Knox Press, 1985), 95]). This skin is important, though: 'For I know that my Redeemer lives, and at last he will stand upon the earth; and after my skin has been thus destroyed, then from my flesh I shall see God' [19:25-26]. Driver notes that the Hebrew 'means struck off' and compares Isaiah 10:34 ('the only other place in which the word occurs, used of striking away the thickets of a forest'). This, according to Driver, supports his reading that the Hebrew has Job afflicted not with boils but with 'elephantiasis' ('the reference is to the ravages of his disease: in Elephantiasis pieces of ulcerated flesh, and even of bone, often fall away', 55). Maybe, but I read this is having a broader relationship to the convenant of circumcision. Indeed, I'm half tempted to put together a reading of the whole book as a symbolic drama of the necessity for circumcision to appease God. (The reasoning, I suppose, would go something like this: sometimes God rewards virtue, but sometimes he sends sufferings to afflict the virtuous too. The best way to understand this strange lack of larger existential justice is in terms of a chosen people; remove a piece of skin, as a covenant, and you establish a situation where (as it were) God will speak with you directly, and convert your sufferings into redemption).

Still, my first instinct is that the skin thing serves as a marker of boundary. In other words: where conventional accounts of Job say that the protaognist endures two separate bouts of affliction (first the loss of his possessions; then the sickness of his own body), I wonder if the point of the book isn't precisely that he suffers three: to the two external ones he stands up well (to the first he says 'Naked came I out of my mother's womb, and naked shall I return thither: the LORD gave, and the LORD hath taken away; blessed be the name of the LORD'; to the second 'What? shall we receive good at the hand of God, and shall we not receive evil?'. 'In all this,' we're told, 'did not Job sin with his lips.') The third affliction is on the other side of the skin, however: it is internal -- Job's own despair. It is clear that this, both in terms of the amount of space the text gives over to it and the intensity and eloquence of the poetry, is the real challenge. It's easy to endure losing things, and even one's health; it is very hard to endure prolonged depression. In fact the book suggests that the way out of depression is via the short, sharp shock of God's anger ('Hast thou commanded the morning since thy days; and caused the dayspring to know his place? No? Then SHUT UP with your complaining!')
Posted by Adam Roberts Project at 00:57