Mad conspiracy theorists strike me as less imaginative now than they used to be; the same tired old grooves are worn through (UFOs, Lizards, 9/11 et al). Why don't they pick up some of the more intriguing looser threads? Here's a bronze coin from the period of Herod the Great. One faces shows -- no, not a UFO, but a military helmet: 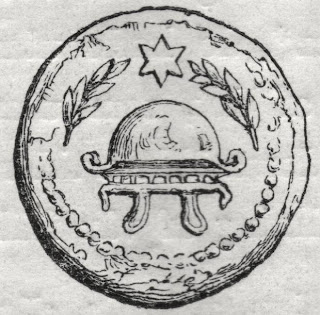 But what interests me more is the other face of the coin: 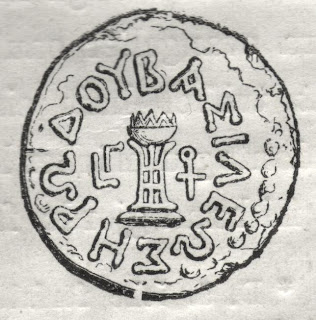 The legend there tells us under whose reign (Bezonian): BASILEWS HRWDOU, 'of King Herod'.  But look at the cross, just to the right of centre.  Doesn't that merit a loony conspiracy theory?  Really?

Looking into it, scholars seem to suggest it is either (a) a version of the Egyptian 'ankh' symbol, with religious signification; or (b) 'a mark of monetary value, "TR", a piece thrice the value of the chalkous, or smallest copper coin.'  But come along! That's ordinary and boring. Surely we can do better than that.  Let's start with: Herod was a time-traveller from a Christian future, who ...

You can fill in the rest for yourself.
Posted by Adam Roberts Project at 00:41

To the left of the brazier is clearly L and R standing for Left and Right. Notice that the Left is significantly bigger signifying the 'left hand path' this together with the clearly upside down cross and the brazier being symbol for fire lead me to deduce that Herod was a satanic time traveller form the future. Above the brazier it seems to say 'boy Bam' a clear warning that the coming Anti-Christ will style himself upon Bam-Bam from 'The Flintstones.'

That's clearly an Olympic torch on the back; and the victor's palms on the front either side of ... a Soviet red star! Clearly the coin proves that Christ was a Russian Communist athlete.

There are not many blogs like your one. very interesting. I also run a website on
lg LED tv
I'll be back to read more.