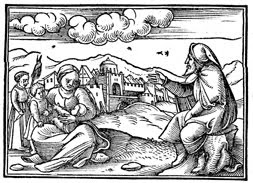 The opening chapter of The Book of Hosea is an intriguing puzzle:


2.And the LORD said to Hosea, Go, take unto thee a wife of whoredoms and children of whoredoms: for the land hath committed great whoredom, departing from the LORD.
3: So he went and took Gomer the daughter of Diblaim; which conceived, and bare him a son.
4: And the LORD said unto him, Call his name Jezreel; for yet a little while, and I will avenge the blood of Jezreel upon the house of Jehu, and will cause to cease the kingdom of the house of Israel.
5: And it shall come to pass at that day, that I will break the bow of Israel in the valley of Jezreel.
6: And she conceived again, and bare a daughter. And God said unto him, Call her name Unloved: for I will no more have mercy upon the house of Israel; but I will utterly take them away.
7: But I will have mercy upon the house of Judah, and will save them by the LORD their God, and will not save them by bow, nor by sword, nor by battle, by horses, nor by horsemen.
8: Now when she had weaned Unloved, she conceived, and bare a son.
9: Then said God, Call his name Stranger: for ye are not my people, and I will not be your God.
10: Yet the number of the children of Israel shall be as the sand of the sea, which cannot be measured nor numbered; and it shall come to pass, that in the place where it was said unto them, Ye are not my people, there it shall be said unto them, Ye are the sons of the living God.

(The image at the top is of Hosea, Gomer and their three children; from the 1560 Geneva Bible) the names of the last two children ('Lo-ruhamah'' Lo-ammi' in the KJV) are from J B Phillips Four Prophets rendering (1963). The conventional reading of this strange passage is that the 'marry a prostitute' command is a way of symbolising Israel's relationship to Jahweh:


While scholars suggest the marriage metaphor presented in Hosea describes the relationship between Israel and Yahweh, the metaphor itself remains controversial in its meaning and interpretation in modernity. This is particularly true among feminists ... Biblical scholar Ehud Ben Zvi reminds readers of the socio-historical context in which Hosea was composed ... Ben Zvi describes the role of the Gomer in the marriage metaphor as one of the “central attributes of the ideological image of a human marriage that was shared by the male authorship and the primary and intended male readership as building blocks for their imagining of the relationship.” Tristanne J. Connolly makes a similar observation, stating that the husband-wife motif reflects marriage as it was understood at the time. Connolly also suggests that in context the marriage metaphor was necessary in that it truly exemplified the unequal interaction between Yahweh and the people Israel. Biblical scholar Michael D. Coogan makes an interesting point regarding genre that can also lend a hand to the interpretation of this metaphor. Coogan describes the importance of understanding the covenant in relation to interpreting Hosea. Hosea falls under a unique genre called “covenant lawsuit” where God accuses Israel of breaking their previously made agreement. God’s disappointment towards Israel is therefore expressed through the broken marriage covenant made between husband and wife.

This doesn't seem to me to address the issue of the flat contradictions of the passage.  Observing the commandments is a way of following God's instructions; but in this passage God instructs Hosea not to follow his instructions ('Would God really command his prophet,' asks one commentator, 'to marry someone that, according to Deuteronomy 22:20 was supposed to be stoned?); he tells Hosea that Israel will not be saved and that Israel will be saved.  It looks as though the passage is deliberately trying to short-circuit the larger master-follower logic of humankind and God's relation.
Posted by Adam Roberts Project at 00:54