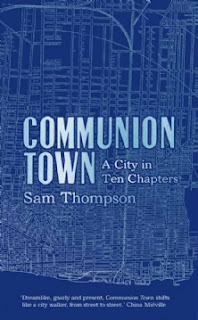 In the introduction to a recent reprint of Dracula (Constable, 2012), Colm Tóibín makes the case for Stoker’s book as, specifically, a great Irish novel. The apparent absence of great Irish writers of the nineteenth-century, before Joyce (we might prefer: before Wilde and Shaw) is an illusion, he says. The 19th-century, Tóibín argues, saw important manifestations of a kind of Irish subconscious in the writings of Maturin, Le Fanu and Stoker. He quotes Maria Edgeworth, from 1834:


It is impossible to draw Ireland as she is now in a book or fiction. Realities are too strong, party passions too violent, to bear to see, or care to look at their faces in a looking-glass. The people would only break the glass and curse the fool who held the mirror up to nature—distorted nature in a fever.

So, change scenes: Communion Town, first novel by the (clearly) very talented Sam Thompson. It’s about London, but it follows the Pratchett-Harrison-Gaiman-Miéville line—and what a strange collection of names to bring under the same umbrella—of writing about London indirectly by writing about an imaginary metropolis that both is and is not London. If I ask why?, I hope it won’t be taken, by the seven people liable to read this post, that I’m sniping at the validity of the 'speculative' approach as such. Obviously not; it’s what I love; it’s what I do. But what is our excuse? We aren’t living through the situation Edgeworth described. What does a fantastic and metaphorical apprehension of the city have that documentary verisimilitude (say) doesn’t?

Here's one idea: that we metaphorise the monstrosity of life as actual monsters because, pace Edgeworth and Stoker, it’s the only way we can articulate it. But I don't think so; we're post Chatterley-trial, after all.  All sorts of horrible things get written and published in broadly 'realist' modes nowadays. Another is that we metaphorise that monstrosity, even though we’re perfectly capable of addressing the monstrousness more directly, because we’ve fallen in love with our imagined monsters to the exclusion of real life. Maybe the problem is that we take our imagined monsters too seriously—more seriously than the problems of real life. Maybe the problem is that we don’t ironize our metaphors enough. Of course, I would say that, wouldn’t I?

So here’s Thompson’s City (it is unnamed in the novel: ‘Communion Town’ is one of its quarters); more specifically, here's it's main railway station:


A world of grey dawn twilight and blackened stone above, rainwater dripping from the girders, pigeons skulking in rows and strangers spilling from carriages to gather on the concourse, disoriented. [3]

Waterloo? Or, wait: Paris Gard de Nord? (further out, ‘...those banlieues where the old streets are overshadowed by never-completed tower blocks stalled midway through the process of being torn down’ [6]). No: because we’re on the coast (‘I head past shut shops and cafés and across the park … as the gaining light scribbles colour and texture into the world, and soon I smell brine, and I’m on the seafront, buffeted by gusts of wind with crows blowing around above the mud’ [10] Aberdeen?). Except the flavour is London (‘River walkways and cycle paths looping from Three Liberties to Green Stairs, from Syme Gardens to Glory Part’), inflected—as actual London increasingly is—via Continental Europe (a metro rather than an underground; ‘these flower tubs and iron railings, these stained white pavements, locked restaurants, fire escapes and commercial accessways, these airy canyons whose window-sills are crowded with geraniums …’ [41]; ‘the Market was a broad, kinked half-mile of cobbled thoroughfare as old as the city, jammed with stalls’ [146]; ‘tarry clutches of lobster pots lay here and there’ [173] ‘Simon rode the metro over to Sweatmarket station and climbed through the chipped tiling and wet concrete up to the streets of Glory Part. He crossed a footbridge and turned down Sluice Lane.’)  What else? Well there’s something monstrous in this city. Which is to say, there are monsters in Thompson’s city rather in the way that there are ghosts in Turn of the Screw.

It’s not a novel, although I’m not going to sit here (I do happen to be sitting down) and tell you that taxonomy matters. It doesn't matter that it's not a novel, but it is not a novel for all that.  It is ten short stories, linked each-to-each not by character or narrative but by the propinquity of all taking place in the same imaginary city, as well as by a certain commonality of mood, tenor and theme (arrival; alienation; suspicion; compromised love; crime and violence). The first story is sort of about terrorism (a group call ‘Cynics’ attack the city’s Metro in a 7/7esque move). The second is a melancholy sort of love story that has to do with music and the making of music. In the third, a boy builds elaborate model city in his room (Kurosawa liked to put models of his worlds in his fictions about his worlds too). The fourth, ‘Gallathea’, spins Noirish adventures amongst the criminal element via a slightly clumsily ventriloquized Chandler tone (‘I tipped the spirit into the back of my throat and choked appreciatively as it burned all the way down. The swell at the other end of the bar was taking a sidelong interest in me’ and so on). Then there’s ‘Good slaughter’ , a Dexter-ish (or, we might say, ‘Sinister-ish’) first-person tale of serial killing; ‘Three Translations’ again about arrivals, and foreignness; ‘The Significant City of Lazarus Glass’—perhaps the best of the stories—much interested in crime as puzzle (‘exquisite enigmas, mysteries, sinister and bizarre: for Peregrine Fitch these were at once a vocation and the keenest happiness of life’ 189); then ‘Outside the Days’ and ‘The Rose Tree’ (We’re in a pub, one evening. A bold young man says: ‘They tell me that in this season, in your city, no one dares go out after dark … well I’m going out!’ [243] So what happens to him? Well he comes back. ‘unsteadily, with his jacket hanging open, confused … one arm of his jacket was ripped and the blood was sticky on his hand. We couldn’t work out where all the blood had come from.’ [252]. He falls down.) Finally ‘A Way To Leave’ tells us about the relationship between Simon and Florence, and, well, about ways of leaving.

Thompson works to give each chapter a different voice, and this kind-of-works, though it’s a little hit and miss. My sense is that Thompson’s skill as a writer is not in variety, or pastiche, but in a kind of dense, closely observed atmospherics. His dialogue is not very well differentiated, character to character; nor does it have the snap or vim of actual interchange; and his plotting is a touch over-reliant on a small number of oblique knight’s-moves—the beauty of insinuations, rather than the beauty of inflections. But the novel is often very striking and memorable, and many moments are eerily beautiful, and that’s not (sniff! sniff! sorry; bit of a cold) to be sniffed at. Does the novel wear its academic learning on its sleeve? Pharmakons and homi sacri? A serial killer called ‘Le Flâneur’? Characters from Jonson’s Alchemist? Yes; well that’s alright. Pretentious is the new black. Will Thompson win the Booker Prize? Maybe, though not with this novel. (Will Thompson win the Clarke? That’s a more plausible supposition, and a more valuable prize).

Wait a minute: who's Will Thompson?

I’m more interested, I think, in the larger picture: the thing this intriguing novel is symptomatic of. That there is more purchase in talking about the fragments of urban subjectivity by removing it from the real. I wonder, though: is that true? It’s not so much about the fragmentation of urban living as it is about the subjectivity of urban spaces (all these people, like the ten speakers of The Ring and the Book perceive a slightly different city!) which is news about on the level of the news when Roscius was an actor in Rome. Buzz, buzz.

Here’s what I half-suspect, though I’m not sure, am still thinking it through. The predatory violence at the heart of ‘civilised’ society, sexualised and class-marked, was the hidden thing that could not be directly expressed by a 19th-century writer like Stoker. What’s the 21st-century equivalent? We can write as much violent sexualised class critique as we like; and we do. It just doesn’t change anything. What a novel like this suggests is that it’s something else that is becoming inexpressible except via the displacement of metaphor: a mood, or a flavour, a particular scent of ontology. The way living in the city makes us feel like strangers. The way it baffles us, intrigues us, frightens us, attacks us. We can’t admit to it, directly; because we’re all so clever and postmodern and self-aware. It may be a variant of the Eco notion that we can no longer own emotion directly (that we cannot say ‘I love you’; we can only say ‘as Barbara Cartland might say “I love you” … and how that Barbara Cartland reference dates old Umberto!). Except that the point of Communion Town is not love. It’s something else.
Posted by Adam Roberts Project at 09:38