The Fellowship of the Ring, Book II

So: the standout of this book is still the wonderful, chilling journey through Moria, which is as I remembered it. More to the point, I read this section with a quarter-of-my-mind on this 'Hobbit Holey-Space' paper, written out of collaborative discussion at the Third Annual Science Fiction Foundation Masterclass (University of Liverpool June 10-12, 2009), in part because the passage through the holey-Misty-Mountains figured largely in that. But actually, book II contains (Moria aside) almost no holey-spaces, which seemed, somehow, striking to me. Unless we take the fellowship itself, as a Round-Table-style collective, as somehow 'ring-shaped', as see a metaphorical hollowness at its heart.

No, what struck me the most on this re-reading was the writing. Specifically, the two,splendid inset writing-images in the Moria chapter. This one: 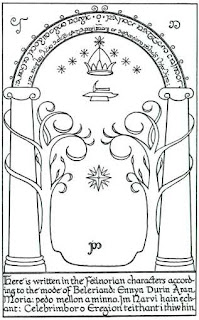 The speak friend and enter image; and this one: 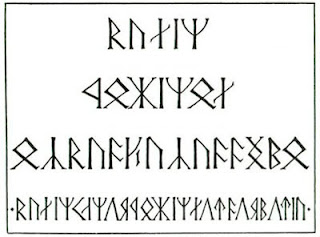 BALIN SON OF FUNDIN LORD OF MORIA. They're lovely; and the book's appendices stand testament to Tolkien's interest in fine calligraphy. But they got me wondering. One thing I wondered was: why are there so few written texts in the world of the Lord of the Rings? Lots of oral texts; the novel is littered with interpolated songs and verses and riddles. But tabulating all the written texts mentioned doesn't give us very much:

1: Moria-writing. Namely the two texts already mentioned, together with the written record the Fellowship discover inside Moria. They attract attention by virtue of being so slpendidly, visually rendered.
2: Bilbo's book. But this exists in the novel largely (until the very end) as unwritten; something Bilbo will get around to at some point. More, it exists in some complicated metatextual relationship with the novel we are reading, so I'll put it on one side for a moment.
3: The odd single rune: Gandalf marks his fireworks with a G-rune, for instance; and scratches '3' on a stone at Weathertop.
4: One 'scroll' mentioned and quoted in the 'Council of Elrond' chapter, in which Isildur writes down what the ring looks like, records its inscription, and declares it is 'precious' to him. Which leads me, of course, to:
5: This:

That's, obviously, writing of the profoundest and most penetrating significance for the novel. More, it is evil. It precedes, and determines, all the (actual) writing that constitutes Tolkien's novel. Can we say, taking things a little further, that it in some sense stains written text with some malign mark or quality? The ring-writing itself, and Isildur's scroll, are permanent records of the wickedness of the ring in action, after all.

So I started thinking of the way written marks can be misinterpreted: Strider and the hobbits don't understand Gandalf's '3' rune at Weathertop; Gandalf himself misses the true meaning of the Moria-Gate inscription. But then I thought: actually, the opposite is closer to the truth of it.

Gandalf's problem with the Moria-gate inscription is that he over-reads; he assumes a level of complexity that isn't there. When he sees how straightforward the instruction is he laughs. Something similar is the case with 'the remains of a book' they find at the beginning of II:5. Initially it looks as though this, with an almost facetious literalness, is going to be 'difficult to decode', in this case because it is so materially damaged.

'We drove the orcs from the great gate and guard -- I think; the next word is blurred and burned: probably room -- we slew many in the bright -- I think sun in the dale.'

And so on. But in fact, the reading of this text reveals a near-fatal facility, a slippage between text and world. They read the words 'We cannot get out. The end comes, drums drums in the deep .... they are coming'' and without intermission these words becomes their reality.

There was a hurrying sound of many feet.
'They are coming!' cried Legolas.
'We cannot get out,' said Gimli. [341]

In other words, the thing with written language is not that it is too obscure, or ambiguous, or slippery; but on the contrary, that it is too plain. It does exactly what it says (you speak 'friend' and enter). It bridges the gap between text and world too immediately, and renders itself real with a dangerous completion. This is at the heart of the power of the ring. The whole novel is a written-textual articulation of that fact.

Writing in this sense is prior; foundational (LotR is a logocentric text): it is what you find when you excavate down, below the surface logic of the represented, past the oral traditions and remembered songs. Which is why Moria is the precisely the right place for these two fine calligraphic interpolations, and why no such writing (inserted into the text) is found anywhere else in the novel, the ring excepted. The symbolic logic of Moria is: dig down deep enough, and you free a terrible, destructive evil. This evil is literalised as 'Balrog', a fiery agent of destruction. But the novel has already established the crucial fiery agent of destruction in the literal letters of the One Ring ('"I cannot read the fiery letters," said Frodo, in a quavery voice.') Oral literature connects you with a living tradition of other people; but written literature short-circuits community and conducts a spark of terrible danger directly into reality.

At this point, I could launch into an involuted meta-textual discussion about how this potential-for-evil danger of written language inflects a text that is itself embodied in written language. And there is something interesting, and important, there: it explains, for instance, why Tolkien gives over quite so much of the Return of the King's appendices to alphabets. But such a section would, really, write itself; and I can safely leave it as an exercise for the reader.

One last, not-really connecting observation, though. The ring-inscription; take another look at it, up there. Once you know the phonemes ('ash nazg durbatulúk, ash nazg gimbatul, ash nazg thrakatulûk' and so on) it's striking how much the Elvish script looks like a deliberate and rather beautiful confection of manuscript 'a's, 's's, 'h's, 'n's, 'g's and 'z's (or '3's).
Posted by Adam Roberts Project at 01:22

Moria(h) is also where Abraham was asked to sacrifice Isaac in a fire until the later substitution of a lamb.

Looking at it from the Norse/Germanic perspective that Tolkien was toying with, Odin/Wotan, the discoverer of writing, was a notoriously treacherous war-god to his worshippers.

And curious how writing had to be discovered, not invented … before the beginning was the word, eh?

According to Christopher Tolkien's The History of the Lord of the Rings, there was originally to have been another text, the "King's letter" inviting Sam and family to join Aragorn for a picnic at the Brandywine Bridge.

The letter was written out in Sindarin and in translation into the common speech (represented by transliteration of English in tengwar). Two versions of the letter are printed in Sauron Defeated.

The proposed Epilogue was apparently much criticised and Tolkien decided not to include it in the published Lord of the Rings, but much of the material in it appeared in the appendices.

i intend to get a tattoo of the writing on the Ring. is what you pictured absolutely accurate?