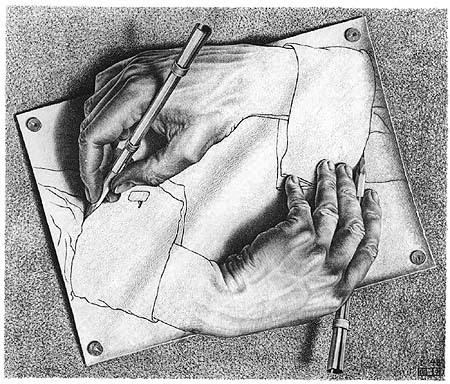 This is used so often as an illustration for the concept of 'strange loops' that it has become dead to our eyes; but a quick glance shows that strange-loopiness has nothing to do with it. Only a clumsy viewer would think that each hand here has drawn the other from scratch. How could they? Look at the bottom hand: it is tethered at the wrist by its two-dimensional sleeve ... it could hardly reach around with its pencil to draw all the elements of the upper hand (and vice versa ...) Nor is there space on the page for both hands to lie. No: the moral here is in the ambiguity of the title ('hands' means 'many hands' just as much as it means 'two hands'; we could do with an aliter/alius distinction in our plurals). Escher's portrait is actually of the invisible third hand that set the whole in motion .... Escher's own hand, in other words. It is, as much of his work is, a self-portrait.
Posted by Adam Roberts Project at 05:25